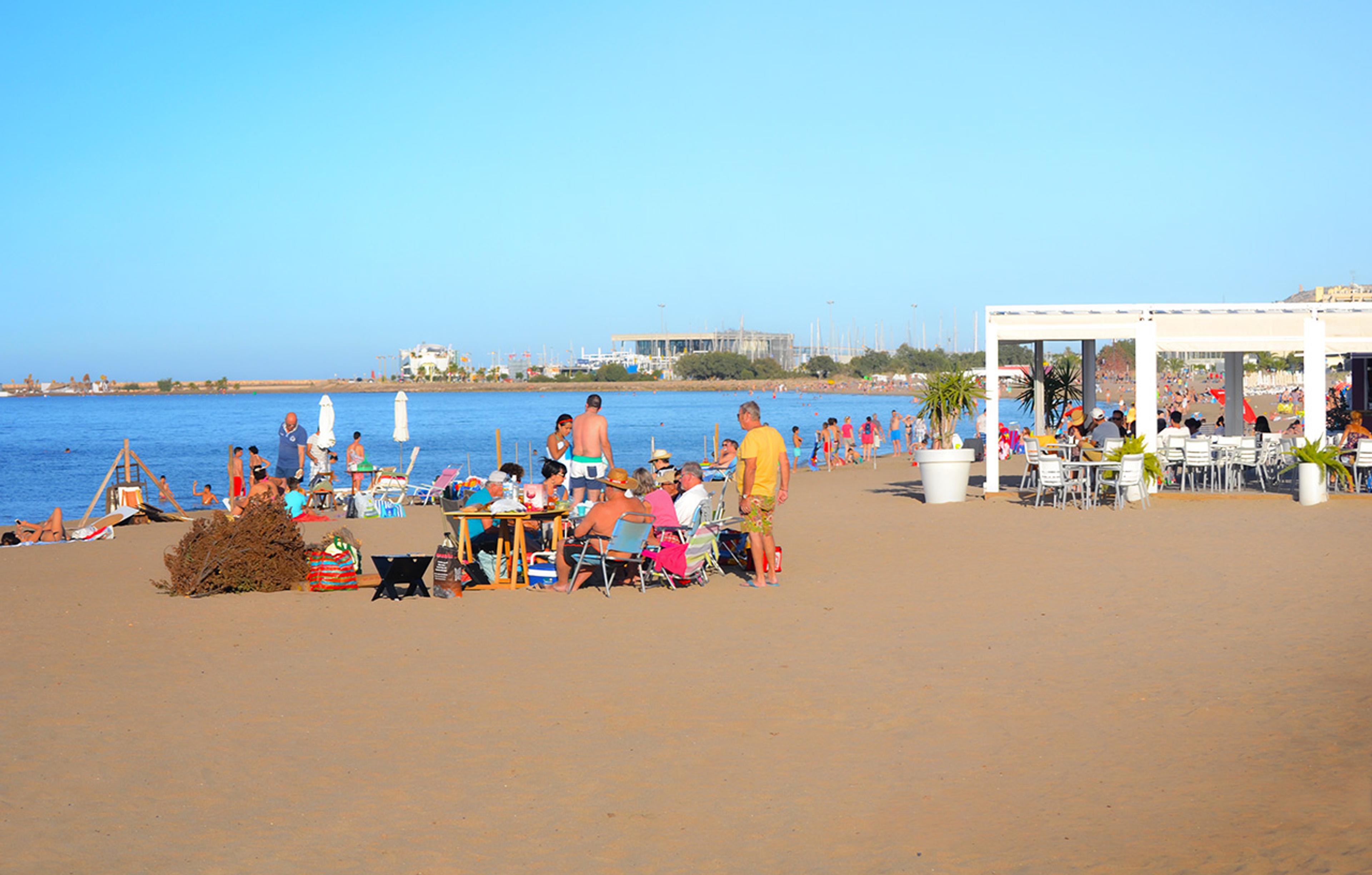 Spain’s gorgeous beaches and superb gastronomy combined, make for an ideal Spanish beach destination for foodies. And what better experience is there than soaking up the life-enhancing goodness of the Mediterranean and its culturally rich cuisine? As an expat living here, I’ve learned that locals, yet few visitors, know the rendezvous of the two is Valencia’s beach town of Denia. The charming town is emerging as a foodie’s dream-pairing come true. Here’s why and how to get your fill of this gastronomical, Spanish beach destination before everyone else finds out.

Located between the cities of Alicante and Valencia (and their international airports), Denia is an authentically Spanish town. It’s not too big, not too small, and offers great quality that is excitedly affordable compared to the rest of Spain’s Mediterranean Coast. It has stretches of both sandy and rocky cove beaches, two marinas (one with ferries to Ibiza), and a magnificent castle. A favorite among stylish Madrileños (locals from Madrid), the town also boasts a chic shopping scene and an array of plush accommodations.

When it comes to eating well, Denia knows how it’s done. The locals say that there are so many restaurants in Denia, it would take over a year to visit a different one each day. It’s no surprise that the town is designated a UNESCO Creative City of Gastronomy, complete with a 3-starred Michelin restaurant.

Three is a Charm for Denia Beaches

Denia’s beaches are either right in town or within walking and biking distance, not to mention even closer by car. It’s a popular Spanish beach destination among local Spaniards and northern Europeans.

Relax on the sandy shores of the Punta del Raset beach, the closest to the town center and right next to the Portet Marina. This is also considered the beginning of the Las Marinas beaches, which extend for over 20 kilometers.

Enjoy the views of the sea and the castle while sipping on refreshing cocktails and savoring Spanish food at the two chiringuitos (beach bars). Just steps away is the Playa Escollera Norte, popular among windsurfers (even those who are just learning).

At the other end of town, and next to the Denia Marina, is the Marineta Cassiana. This quaint bay of soft sand and tranquil waters is ideal for paddle boarding. After basking in the sun, quench your thirst at the local chiringuito at the water’s edge. Or enjoy a stroll along the promenade lined with palm trees, pine trees, and beautiful homes. This is also where Denia’s DNA Gastronomy Festival takes place each year in September.

Continuing down the promenade along Marineta Cassiana leads you to the beginning of Las Rotas. This scenic 4-kilometer stretch of rocky coves will have you feeling like you stepped onto the movie set of Mama Mia. But stop in at any of the locally owned restaurants with picturesque terraces poised over the water, and the mouth-watering food will remind you that you’re in Spain.

Las Rotas is ideal for snorkeling in the enticing waters that beckon you to join the colorful fish and sea life, which are protected as a Marine Reserve.

To explore further, hike the short trail from the very end of Las Rotas up to Gerro Tower. This 16th-century watchtower has incredible views of the coastline and the Mountain Montgo.

Have the renowned clochinas, local mussels distinct to this region of Valencia and considered the best in Spain (only in season from May to August).

Try the pulpo seco (dried octopus), which you can see being dried in the sun at restaurants along Las Rotas.

And if you want to splurge, feast on the delectable Gamba Roja de Denia, which are the local shrimp known for their incredible taste (and hefty price tag).

Once you’re rejuvenated by the sea and sun, explore Denia’s history and incredible cuisine. Everywhere you go in town, you’ll get to experience both.

Head to Marques de Campo, the lovely tree-lined main street of the town center, to enjoy great shopping and an array of appetizing restaurants. My favorites here are Tasca Eulalia at one end, and at the other far end and past the fountain, Bodega Casa Benjamin.

Tour the Denia Castle, which is of Muslim origin and dates back to the 11th century. From here you can take in 360-degree views, visit the archeological museum at the top, and even cool down with a refreshing drink at the cafe. The entrance fee is only €3 for adults.

Wander the pedestrian street of Calle Loreto, but go hungry. It’s lined with brightly colored buildings full of tapas bars and restaurants. I recommend stopping in at Txoko Bar, loved by locals and visitors alike. For only €2 you get your choice of a beer, wine, cava, vermouth, or Sidra (Spanish cider) and a free tapa from their tapas menu.

Take the tunnel under the castle to the tasty bars and restaurants of the old fisherman’s quarter, which is on the west side of the castle and across from the Marina Portet. This neighborhood is also known for where movie director John Farrow filmed the story John Paul Jones, which also starred Mia Farrow.

At the foot of the castle, hang out at the new Els Magazinos, an innovative and hip market area featuring a diverse array of food vendors in a street-food style environment.

Make sure to also snack and shop at Denia’s Mercado Central, full of the best local vendors, artisan goods, and a weekly Friday market of local produce, held outside.

If you get a wild hair, get over to the Marina Portet and take one of the Balearia ferries to Ibiza or the other Balearic Islands.

Or walk along the seawall in the Denia Marina and stop for a bite to eat at one of the best restaurants there, Basta (make sure to get their calamari).

Both marinas have several bars and restaurants in gorgeous settings. Enjoy views of the sea and classy sailboats set against an epic backdrop of Denia’s castle and the mountain Montgo.

And of course, if you’re wanting a gastronomical experience of Michelin Star proportions, then visit Quique Dacosta. This 3-starred Michelin restaurant is known for creative dishes that feature only the local ingredients of the area.

Denia is one of the few Spanish beach towns on the Mediterranean that still feels like a well-kept secret and values its gastronomy so creatively. While the summer months are popular and busier, the crowds are still nothing like those in the more typical destinations along the coast. Add to that the fantastic quality of cuisine, local heritage with innovation and remarkable affordability, and this Spanish beach destination will satiate your foodie-heart.