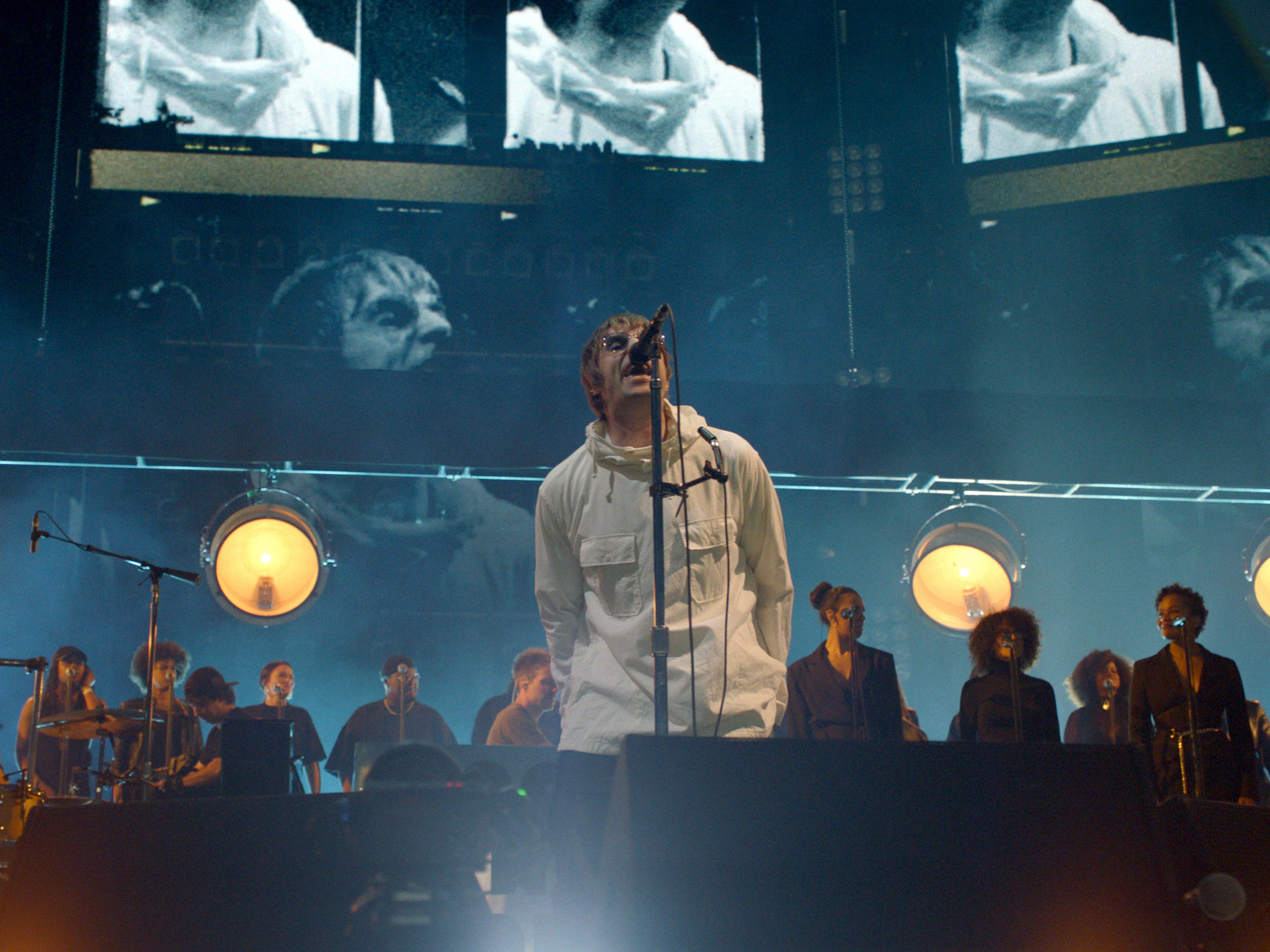 A triumphant and rousing return for the ultimate rock ‘n’ roll star as captured in this fascinating documentary film - 'Liam Gallagher: Knebworth 22'

So Knebworth again. He came. He saw and he fucking conquered. Some (might say!) that you shouldn’t go back to Knebworth, but to hell with expectations and rules. Liam’s always swaggered to the beat of his own drum anyway. When it comes to Knebworth, as the man says himself ‘This is history - part 2!’

Let’s cast our minds back to the Platinum Jubilee weekend in June. I was at Knebworth reviewing the one and only Liam Gallagher. When he announced that he would be performing at the iconic Hertfordshire venue, 26 years after Oasis did THAT gig, there were a few rumblings from naysayers, but predominantly, there was a real sense of anticipation and the excitement was palpable.

LG sold out two nights and his huge back-to-back shows saw him perform in front of 170,000 adoring fans. Whether you were there or not, ‘Liam Gallagher - Knebworth 22’ will make you feel like you were there.

This brand new documentary film directed by Toby L , who has also worked on film projects for Bastille, Olivia Rodrigo and Damon Albarn offers an intimate insight into Liam and his team’s preparations for Knebworth.

It follows Liam as he heads back to the hallowed ground of Knebworth. This intriguing film showcases tracks from the gig interspersed with backstage footage which includes interviews, soundchecks and more.

There’s also commentary from his band members and fans. It’s an absolutely fantastic watch for both Liam stalwarts and a new generation of LG fans. Some of them weren’t even born at the height of the band's success.

It cleverly offers several different perspectives of a selection of fans who are going to the gig and the gargantuan impact that Liam has on their lives, many of which have travelled far and wide to watch the iconic gig.

There’s little Audrina, an absolute demon on the ukulele who has thankfully recovered from cancer, the hugely passionate Aya who is missing her biggest exam at college in Belgium to go to Knebworth, Simon who’s taking his entire family of three generations to the gig and has an Liam-themed pub in his garden - the list goes on.

One fan cancelled his honeymoon in Jamaica to go, another used her life savings to go watch Liam and another who has sacked off his job to go. After all, this was going to be the biggest gig of the year, why let weddings/money/your boss get in the way?! They clearly are all channelling the spirit of LG with a ‘zero fucks’ attitude.

Everyone has a story (Morning Glory!) and it’s heartening to see how the magnitude of how Liam, Oasis and his solo music have touched so many people. There’s some throwback footage from the 90’s, including footage from Oasis making their TV debut on ‘The Word’ from 1994.

At the beginning of the film, we see Liam flying over Knebworth in a helicopter and you really get a feeling of how up for it he is. This has been a long time coming. He says that he just wants to get on the stage ‘like a caged animal’ commenting that he ‘just wants to fucking let rip you know what I mean?’.

After the live music industry had been devastated by Covid-19, the return of gigs and festivals has never been more important and Knebworth was the pinnacle of this.

Even Liam admits that he didn’t think they would get back to ‘doing arenas let alone Knebworth’. Both nights had a fantastic line up of support acts on the bill including Kasabian. All of which were hand-picked by Gallagher to join him for the two nights he played at Knebworth.

Kasabian’s Serge makes a cameo commenting how music is ‘bringing people together’ and there’s also insight on Liam and his musical legacy from the likes of Melvin Benn (the promoter and MD of Festival Republic), Sam Eldridge (Liam’s Co-Manager who with Debbie Gwyther who have collectively helped shape Liam’s career and have been instrumental to the success of the Knebworth gigs) and band members - keyboard player Christian Madden and guitarist Mike Moore.

There’s some funny anecdotes, Liam genuinely can’t remember certain aspects and places of Knebworth after performing there with Oasis in the ‘90’s. ‘I’ve never seen it in my fucking life!’ he remarks whilst marvelling at the expansive Knebworth landscape ‘Fucking hell, it’s big Debs!’.

Some of the fans interviewed in the documentary were there and unequivocally have a slightly less than hazy recollection of that summer's day and explained why they wanted to go back for as Liam calls it Knebworth ‘Part 2’. Without a doubt, this gig was really important to them to be part of the story and of Knebworth's heritage.

Some things are always the same, the Oasis tee shirts, the bucket hats (although Liam admits he doesn’t think the fashion (of the ‘90’s) ‘was all that’. But Liam looked resplendent in a pristine white parka on Friday and looked equally cool the following day.

Whilst this documentary doesn’t show any of the footage of any Oasis tracks, the music that is included stands on its own merits, with tracks like ‘More Power’, a beautiful track from 2022’s ‘C'mon You Know’ (his third solo album) the epic ‘Wall of Glass’ from 2017’s ‘As You Were’, ‘Shockwave’ from 2019’s ‘Why Me? Why Not.’, ‘Everything’s Electric’ (which was co-written by Dave Grohl) ‘Better Days’, ‘The River’, ‘More Power’ and more.

Liam was joined by the legendary Stone Roses' guitarist John Squire as the colossal gig drew to a close. It wasn’t John’s first rodeo at Knebworth having also appeared at the venue with Oasis back in 1996. This is sadly not included in the documentary, but it was truly a special moment for the elated crowd.

Liam Gallagher is a captivating performer with a charismatic stage presence, he sings as if his life depends on it and the gig at Knebworth was truly a magical and ‘biblical’ experience.

He’s a powerhouse in a parka, and this documentary not only showcases his craftsmanship and prowess as a performer, but it emphasises how instrumental live music is and what it means to us all.

Of course, it’s not just about Liam’s story, it’s about all of us. How we are all enjoying a moment in time, a song, an album and a gig. We’re all here for the same reason - the music. As Liam says ‘That’s what it’s all about, bringing people together’.

Omission of Oasis tracks aside, what’s clear is Liam’s passion for his music, the gig and his fans. He wants to do the best gig he can whether it’s for 100 fans or 100,000 fans. He is a man of the people and admits he is giving the fans ‘what they want’.

When it comes to Liam Gallagher - Knebworth 22, as LG says himself ‘Do you want to know what’s going on - check this shit out!’

Liam Gallagher - Knebworth 22 will be in cinemas worldwide from Thursday 17th November for a limited time only.