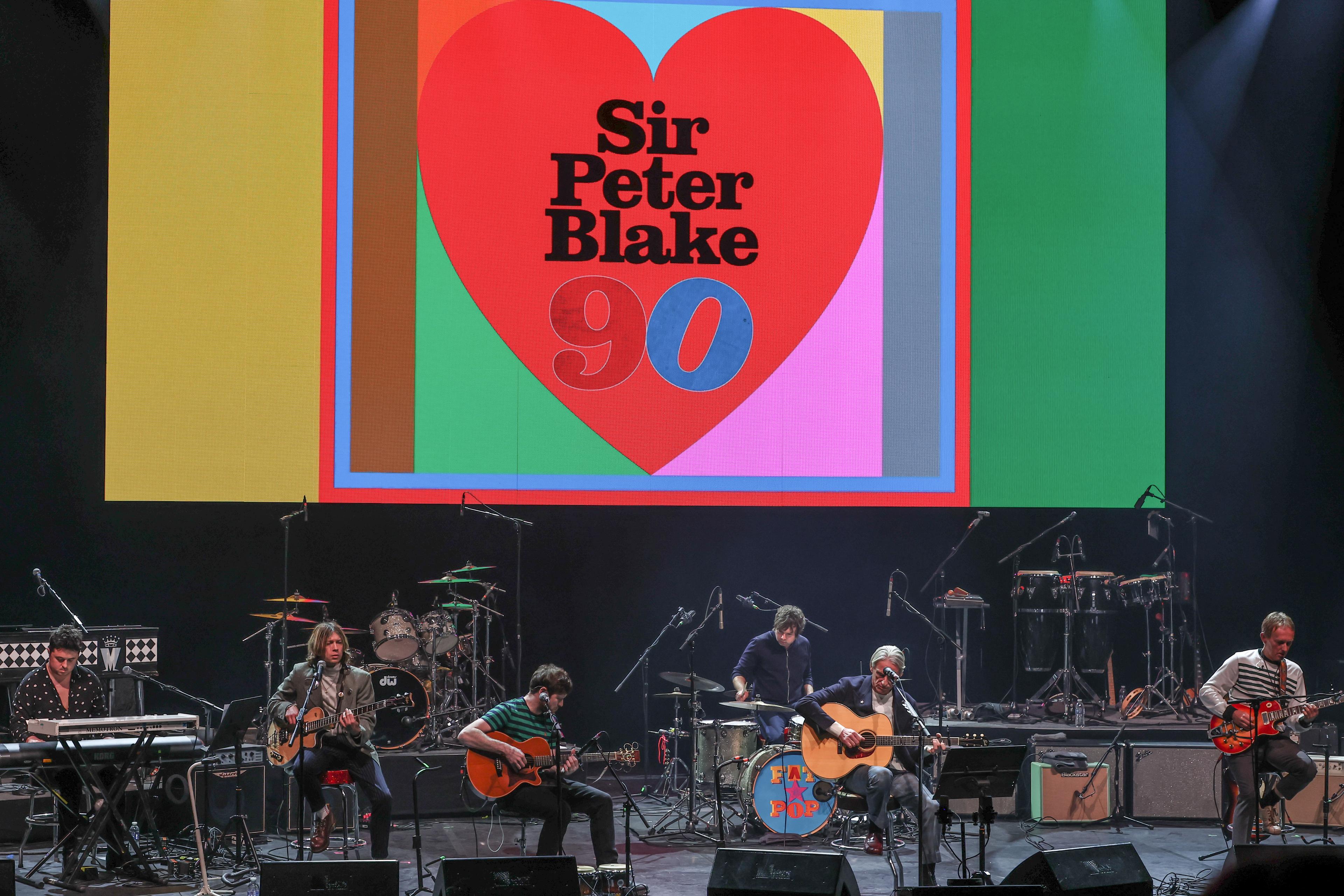 A fantastic night of live music from some of Britain’s finest bands and musicians to celebrate the career and life of one of the world's best artists.

“You say it's your birthday. We're gonna have a good time!”, ok, so this jubilant track came from ‘The White Album’ which was released by The Beatles just one year after the release of the album ‘Sgt. Pepper’s Lonely Hearts Club Band’ and tonight it was the latter album and it's instantly recognisable design that was on the tip of everyone's tongue.

‘The White Album’ (technically known as ‘The Beatles’ album) served as somewhat of a minimalist palate cleanser after the glorious technicoloured dream that was ‘Sgt. Pepper’ which was the brainchild and creative genius of Sir Peter Blake who not only helped cement this album as one of the most iconic album covers of all time, but it helped contribute to it being a milestone album of the band’s career.

This was the case not just visually, but sonically too. Both were a significant shift for the 'Fab Four' and demonstrated how far they had come since their earlier albums such as ‘With the Beatles’.

In celebration of this and the many other incredible pieces of art that Sir Peter Blake has created and to commemorate his 90th birthday which he celebrated earlier this year, musician and songwriter Paul Weller hosted an evening at the Royal Festival Hall at the Southbank Centre to celebrate Sir Peter and his incredible body of work.

The extravaganza was hosted by BBC Radio 4’s John Wilson who effortlessly compèred the star-crammed concert in London where acts like Noel Gallagher, Chrissie Hynde, Paul Weller and Madness all put on a stellar performance.

As well as some mind-blowing sets, the audience (which included Sir Peter and his family) were treated to anecdotes and tributes both pre-recorded and on stage from famous faces from the world of music and art.

All the musicians who performed had their opportunity to sit down with John Wilson and speak about what it was like to either work with Peter or the profound effect that his work had on them either individually or from a collaborative aspect.

There was the expected - talking through the creative process for ‘Sgt. Pepper’ and other albums that had been treated to the ‘Peter Blake’ experience as well as the unexpected which included the confession by singer Chrissie Hynde’s now not-so-secret crush on actor Dennis Waterman (we think he would have absolutely loved this revelation!) where she paid her own tribute to the dearly departed actor by singing a rocky version of his ‘feem tune’ ‘I Could Be So Good for You’ from the TV show ‘Minder’.

The man that devised the event and hand-picked each band/musician for the gig, Mr Paul Weller who was looking as dapper as ever in a tailored jacket and a sharp haircut was introduced to the stage and talked about what it meant to create this event for Peter.

His first introduction to his work was of course via The Beatles which during the chat with John he noted that like most admirers of this album cover that he kept ‘discovering different things. Weller then called upon Sir Peter to design the record sleeve for his 1995 album ‘Stanley Road’.

This instantly recognisable cover—a highly personal collage paying homage to Paul’s childhood and influences is one of his most seminal pieces of work. During his conversation with compere John Wilson, Paul Weller reminisced that he was so ‘nervous and shy’ when meeting the esteemed artist.

Paul’s admiration for his commitment to art was just one of the reasons why he created this star-studded lineup curated by himself in celebration of a true great of British pop culture and how the proceeds were going to benefit two amazing charities which included the Teenage Cancer Trust and the Graeae Theatre Company, of which Sir Peter is a founder patron.

Baxter Dury clad in a pristine pale pink suit kicked off the musical proceedings with a blistering set and showed he meant business by parading around the stage with unsurpassed swagger performing tracks like ‘Pleasure’, Slumlord’ and ‘Miami’ which included some serious dance moves.

He later had the opportunity to sit with John Wilson to talk about the relationship between himself and Sir Peter who had taught Baxter’s father Ian at Art school which resulted in long-standing friendship between the artist and musician.

The pair collaborated several times, and inspired one another’s work, for example when Peter designed the promotional poster for the Ian Dury and the Blockheads’ single ‘Reasons to be Cheerful, Part 3’ amongst others.

Roger Daltrey and Pete Townsend from the legendary rock band ‘The Who’ sat down with John Wilson to talk about Peter and his work. The artist designed the sleeve for album artwork for their ‘Who’ album and also designed and contributed a painting to the sleeve of The Who’s 1981 album 'Face Dances' too.

Musician and all-round kick-ass frontwoman Chrissie Hynde took to the stage superbly supported by her fantastic band which included musicians Tom Van Heel on keyboards and backing vocals and Ben Gordelier from Paul Weller’s band and psychedelic-rock band ‘The Moons’.

Her stunning set included a cover of ‘I Go To Sleep’ by The Kinks, her interpretation of the brilliant ‘Foxy Lady’ by Jimi Hendrix which showcased both her and Jeff Wootten’s spectacular guitar playing on this seminal Hendrix track.

Of course, there were some tracks by The Pretenders in the mix such as ‘Don’t Get Me Wrong’ and ‘2000 Miles’ which gave all the festive feels.

Chrissie is such a giving and warm performer and was so engaging and charming, it goes without saying that the audience loved her set which was followed up by a chat with Noel Gallagher.

An interview with the charismatic Noel Gallagher is always high on my watch list, not only is he always effortlessly entertaining, he also has to be one of the funniest people in the music industry too.

Noel elaborated on how Sir Peter conceptualised and designed the Oasis album ‘Stop The Clocks’ from 2006. The album features a collection of random objet d'art pieces which were found and curated in Sir Peter’s studio.

Peter let Noel and the band pick out what resonated with them which included items far and wide-ranging from Elvis to one of the seven dwarfs. Noel commented that it was an ‘amazing experience’ to be in the Blake studio and without doubt it’s an instantly recognisable piece of art.

How do you follow Mr Noel Gallagher and his indomitable wit and magnetism? It’s almost impossible, but it could only be with a five song set from who Noel calls the ‘Guvnor’ - Mr Paul Weller himself.

Paul performed an exemplary and exquisite set of five songs which included the breathtaking ‘Gravity’ and the uplifting ‘Out of The Sinking’.

It was great to hear ‘Soul Searchers’ from the 2014 album ‘True Meanings’, Paul’s fourteenth solo studio album as well as ‘Broken Stones’ from the aforementioned ‘Stanley Road’ which captivated the enraptured audience.

Of course, we had to hear from the great man himself - Sir Peter Blake who pointed out that today wasn’t actually his birthday, ‘but, er, near enough!’. Fair point, but if you are going to have a birthday shindig, why not go all out and have it at the Royal Festival Hall in front of some music royalty?!.

Surrounded by his family, Peter thanked the acts as well as the audience for attending this one-off live performance.

Then it was time for more music and it was time for Noel Gallagher again who performed a compelling set of some Oasis classics which included a stunning rendition of ‘Stand By Me’ from ‘Be Here Now’.

This was truly a special moment, as this was the first time Noel had sung this track on stage as a solo artist (having last performed this track when he was in Oasis)

‘Wonderwall’ was a triumph and Noel effortlessly delivered on passion, sincerity, conviction and feeling on both this track as well as  ‘Don’t Look Back in Anger’.

He dedicated ‘Live Forever’ to Fleetwood Mac's Christine McVie who had sadly passed away earlier that week which made for a beautiful and touching moment and it evoked a huge wave of emotion that seemed to hit everyone in the audience.

There is something so powerful about those lyrics and the connection Noel has with the audience when he sings like his heart depends on it.

This was a spellbinding performance that showcased not only his spectacular performance skills, but also his beautiful songwriting with the poignancy and meaning of the gorgeous lyrics and his captivating delivery ensured that there was barely a dry eye in the house and he left the audience wanting more.

Suggs from Madness charmed and amused the sold-out crowd with tales over his indecision over the artwork for the tenth Madness album ‘Oui, Oui, Si, Si, Ja, Ja, Da, Da’. Suggs explained that Peter created the artwork after the band kept changing their minds which resulted in the famed ‘crossing out’ design.

There was also an appearance from an animated Bob Geldof who waxed lyrical about Peter’s designs for the Band Aid single and Live Aid.

The Who are always an absolute riot to watch live, and Pete, Roger and their band did not disappoint. They kicked off with a barnstorming rendition of the electrifying ‘Substitute’ which really got the elated crowd on their feet. Of course, there was some classic shredding from Pete who with Roger did a stunning version of ‘Behind Blue Eyes’.

Other standouts included an effervescent rendition of  ‘Pinball Wizard' and a rousing version of ‘Won’t Get Fooled Again' with just the two rock ‘n’ roll stalwarts performing together as they have done so since the 1960’s.

Last but by no means least was the event closers - Madness.

The Camden natives were on fire and put on a scintillating and pulsating display. Their set complete with colourful visual backdrops really got the party underway. From ‘Baggy Trousers’ and ‘The Prince’ to the dynamic ‘One Step Beyond’, the Madness boys cranked up the energy to deliver a high octane and jubilant performance.

Other standouts included ‘The Sun and The Rain’ from 1994’s ‘Keep Moving 'and their delightful cover of Labi Siffre ‘It Must Be Love’. This was a glorious end to a fantastic night of live music from some of Britain’s finest bands and musicians.