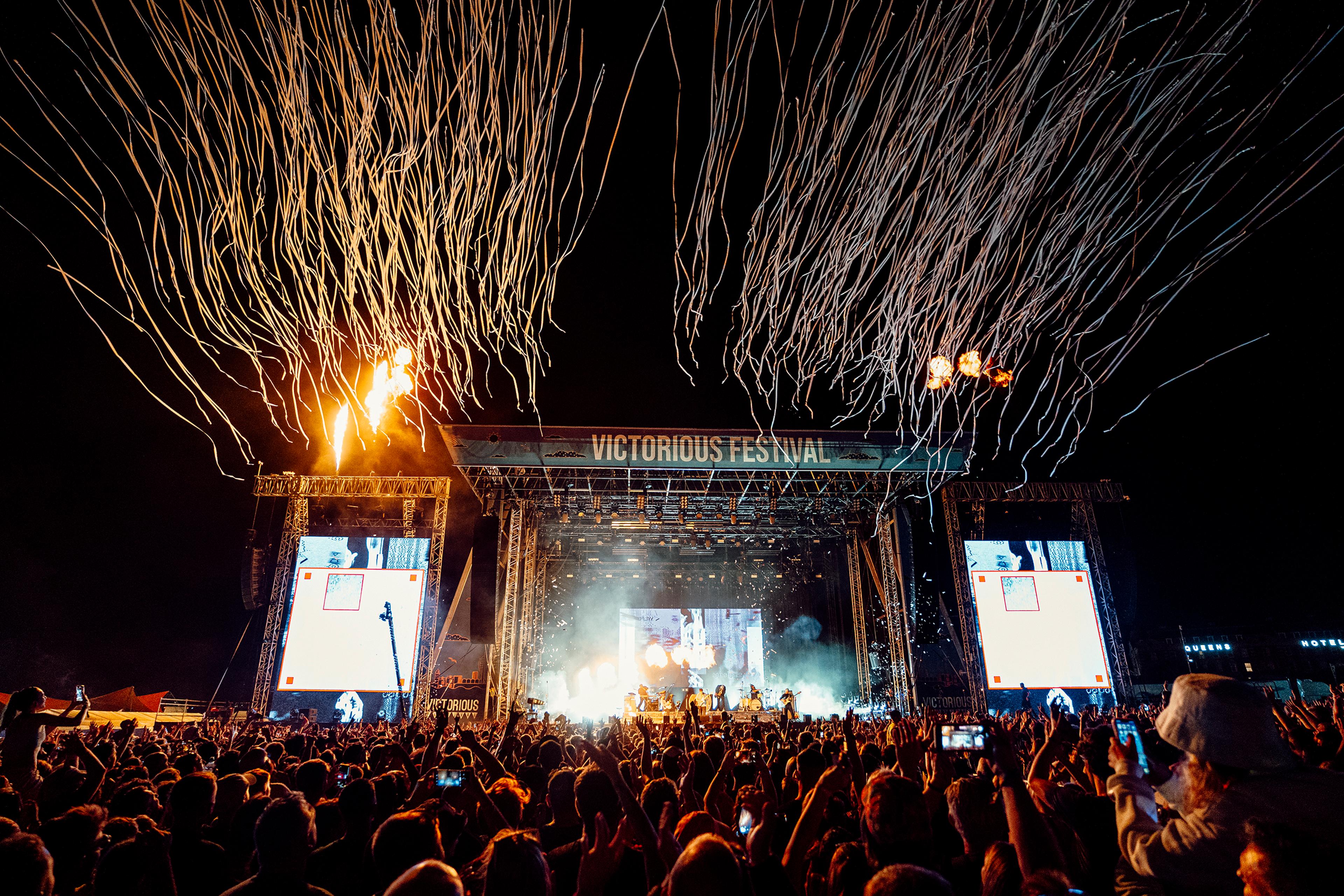 Victorious Festival 2022 Review - from Sam Fender and Suede to James Walsh and Becky Hill, who captivated the crowds at Victorious?

Victorious has gone from being an under-the-radar late summer festival to one of the major players in the UK festival scene.

It has always boasted some of the most eclectic lineups in live music and has previously seen acts like Rudimental, Royal Blood, Manic Street Preachers, The Charlatans, Years & Years and Blossoms.

The festival site is just a stone’s throw from the seafront at Southsea and is renowned for attracting festival-goers of all ages.

This musical extravaganza is one of the highlights of the UK festival calendar and this year saw the likes of the Stereophonics, Becky Hill, Paolo Nutini, Bastille and Sam Fender performing to a sold-out crowd.

One of the best things about Victorious is that there’s something for everyone, whether you are into indie, pop, folk or dance, there’s certain to be a huge selection of acts that you will be adding to your ‘must-watch’ list.

Scottish rockers Primal Scream kicked off the entire Victorious Festival 2022 with a storming set which included some of their most-loved tracks like ‘Movin On Up’, ‘Country Girl’ and the infectious ‘Rocks’. Bobby Gillespie and the band were on fine form and proved their live credentials once again with a fantastic set in the sunshine.

The Common stage also saw great performances from Anna Calvi, Soak and Self Esteem, but one of Friday’s highlights was from indie rockers James (who we reviewed in Porto earlier this year) who provided a stellar set which included ‘Come Home’, ‘Sit Down’, ‘Beautiful Beaches’ and of course the festival classic ‘Sit Down’ which was one of the entire weekend’s highlights.

Naturally, Tim Booth was at his flexible best, dancing as if his life depended on it as well as crowd surfing twice. Luckily, the crowd didn’t let him down, and neither did he.

Tim and the rest of the band were on top form, although the omission of tracks like ‘Say Something’ and ‘Laid’ were slightly disappointing, but when you have a back catalogue as extensive as James, something has always got to give!

Bombay Bicycle Club were on their unusual top form with a jam-packed collection of songs which included ‘Eat, Sleep, Wake’, ‘Shuffle’ and their reflective cover of Selena Gomez’s ‘Lose You To Love Me’.

Friday’s headliner was the incredible Stereophonics who are no strangers to the Victorious stage. Their set was pretty much the same as what the guys played when they supported Pearl Jam at BST Hyde Park earlier this summer and was a masterclass in performance from frontman Kelly Jones and the band.

Fans were treated to rousing renditions of hit after hit which included favourites like ‘Maybe Tomorrow’, ‘The Bartender & The Thief’, ‘Pick a Part That’s New’ and ‘Just Looking’ as well as tracks from their last album ‘Ochya!’ which came out earlier this year.

Friday night’s festival was closed out with a spectacular firework display which provided a colourful and thrilling end to a high-octane night of music.

The second day of the Victorious Festival is always a pretty stellar one and Victorious 2022 was no exception.

It saw some incredible performances from the Sugababes (which coincided with the Royal Navy carrier HMS Prince of Wales passing by - is this royal approval or a mere coincidence?!), We are Scientists and Irish rockers Inhaler who delivered an energetic and dynamic set with tracks like ‘It Won't Always Be Like This’ and ‘When It Breaks’.

Another Victorious veteran came in the shape of Ocean Colour Scene which included some epic guitar playing from Steve Cradock who was resplendent in a cricket jumper, looking effortlessly cool as always.

The set from Ocean Colour Scene was first class and was packed full of their most-loved hits which included ‘The Riverboat Song’ ‘One for the Road’, 'The Day We Caught The Train’ and ‘Hundred Mile High City’.

Saturday also saw performances from The Wombats, White Lies, Declan McKenna all of whom served electrifying sets to the enraptured crowd.

Bastille’s set was first class and with tracks like ‘Back to the Future’, ‘Flaws’ and of course ‘Pompeii’, it’s easy to see why.

Paolo Nutini was another Saturday headliner, it was difficult to choose between Bastille and Paulo who delivered an incredibly strong set that effortlessly demonstrated his capabilities as a lyricist and vocalist.

Fans were not disappointed with his setlist, but the omission of ‘New Shoes’ in its entirety did ruffle a few feathers from those wanting to hear it live. However, Nutini’s set was a well-rounded, crowd-pleasing affair and was a strong way to close Saturday for Victorious.

The Libertines kicked off day 3 of Victorious with a bang, this is a band that doesn’t disappoint. Fans were treated to a set list chock full of favourites which included ‘Up The Bracket’, ‘Don’t Look Back Into The Sun’ ‘What Became of the Likely Lads’ and ‘Can’t Stand Me Now’ which really got the crowd going.

One of my favourite things about this band is the chemistry between Pete Doherty and Carl Barât - both of which put on stellar vocal performances throughout their short but sweet set.

Sunday also saw some superb performances from Sam Ryder who closed with a spectacular rendition of  ‘Spaceman’, Editors, Amy MacDonald and Metronomy who dazzled the crowd with tracks like ‘Right On Time’ and ‘Love Letters’.

Both acts were absolutely incredible; showcasing their impressive back catalogues as well as effortlessly including newer tracks, with world-class sets that truly charmed the crowd.

Embrace who have just released their 8th studio album ‘How To Be A Person Like Other People’ were on fire and fans were treated to sublime performances of ‘Gravity’, ‘Ashes’ ‘Come Back To What You Know’ amongst other beautiful tracks.

James Walsh (Starsailor) has a voice that you could listen to for hours. His understated, intelligent and heartfelt performance had the crowd in the palm of his hands.

His sincerity and tenderness when delivering a song are second-to-none and he has a very special quality that is both captivating and endearing in equal measure.

Songs like ‘Alcoholic’ and ‘Silence is Easy’ are absolutely exquisite and it was a real pleasure to hear them performed with just a guitar in such an intimate setting.

Sunday was one of the busiest days of the festival and with a lineup of Becky Hill, Anne-Marie and Sophie Ellis-Bextor on the Castle Stage, it’s easy to see why.

All three acts provided an energetic and exhilarating set which got the crowds on their feed. Nothing But Thieves provided a rockier end to the pop proceedings with a barn-storming set which included ‘Impossible’ and ‘Real Love Song’.

Suede was one of the final acts to perform on the main Common stage with frontman Brett Anderson delivering hit after hit like ‘Metal Mickey’,‘Animal Nitrate’ and ‘Trash’ before closing with ‘The Beautiful Ones’.

His commitment to delivering a high-octane performance cannot be denied, but he did bizarrely have something close to a meltdown mid-set when he started telling members of the crowd to ‘f**k off’.

Sam Fender’s star continues to rise, not only did he receive huge plaudits for his performance at Glastonbury, but this year alone, he’s supported both The Rolling Stones and The Killers proving that he’s quite possibly one of the biggest musicians in the UK right now.

In a fantastic set of almost 90 minutes, Sam treated the gargantuan crowd to tracks like ‘Seventeen Going Under’, ‘Will We Talk’, ‘Getting Started’  ‘Saturday’, and of course ‘Hypersonic Missiles’ which closed Victorious 2022 accompanied by an electrifying display of colourful pyrotechnics which culminated another amazing weekend of live music down on the south coast.