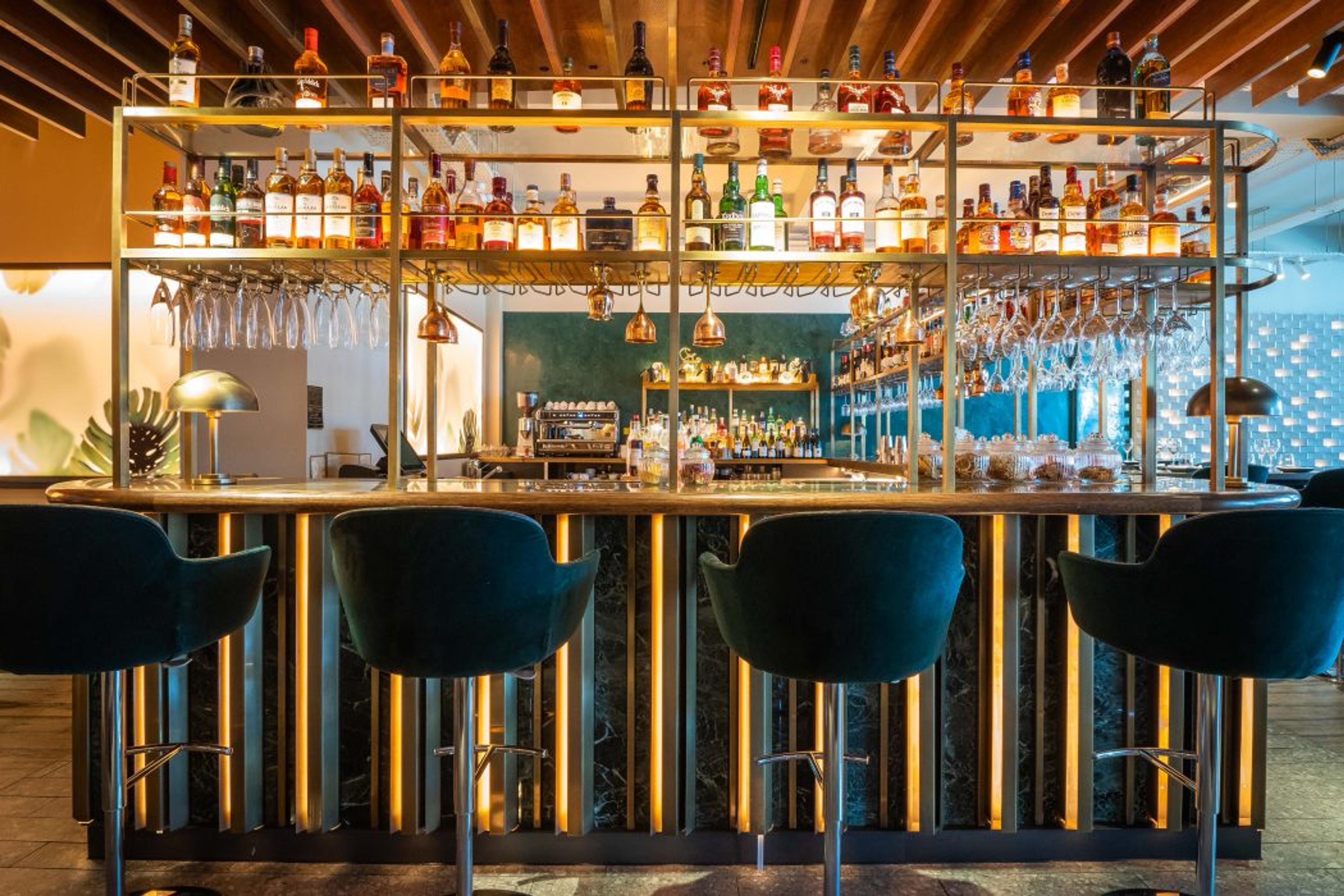 London’s latest Indian, Farzi Café, has the full ability to present first impressions of grandeur, over-priced food and flashiness but it is, in fact, quite the opposite.

London’s latest Indian, Farzi Café, has the full ability to present first impressions of grandeur, over-priced food and flashiness but it is, in fact, quite the opposite. The Indian import landed in London last year, with venues already present in India and Dubai. Sitting proudly amongst theatreland, next to the Only Fools and Horses Musical, it’s blatant that this restaurant has landed itself a real whopper of a spot in the capital, turning heads with its golden hued signage amidst a sea of concrete buildings.

The restaurant offers two levels of dining alongside opulent colours of luxurious gold and emerald green, which hint towards the Indian heritage. Downstairs is the more intimate of the two areas, with plush sofas and darker lighting. Upstairs, where we found ourselves seated, is a more airy and bright space, equipped with a statement bar and open kitchen to appease the people-watching desires of guests.

Proceedings began with a truffle negroni. Farzi has a booming drinks menu which includes a 12-drink heavy Ayurvedically-inspired tasty cocktail menu, cleverly based around your star sign. Aries, for example, makes use of inhouse hemp shrub with a heady hit of coconut and cardamom, whilst Leo presents itself as a delectably light and refreshing spritz, with aromatic bergamot.

Brunch, the boozy stopover between breakfast and lunch, brings people together to raise glasses and natter, and Farzi Café sure does a good one. Try their feasting menu and expect an eclectic journey through India’s complex and colourful food scene.

To begin, we delved into a barley and apple salad with aerated dahi Bhalla; an exquisite dish with a fluffy texture I’d never tried before. The fermented rice pancakes served with feta and baby asparagus playfully mixed the tastes of sweet and sour, with feta wholesomely complementing its rice pancake counterpart. The quesadillas with butter chicken, kidney beans and smoked cheddar were a favourite of my dining companions who raved about their crispy exterior and soft oozy cheese.

When it came to the main course, it was all about one thing… Chateaubriand. As one of the most succulent cuts of beef, it’s a pleasure to try any cuisines take on it, and Farzi’s didn’t disappoint. A dark crust on the exterior from the lick of the hot flame grill and masala spice rub was a beautiful contrast to the perfect pink medium rare that we ordered. The presentation brought a theatricality to the course, as the beef was sliced and draped on a long metal skewer horizontally.

If that wasn’t enough, the waiter slowly poured the rich and spicy tomato jus along the skewer, creating a lagoon of sauce which we were ready to dive into. Tender, smoky and luxurious were the words that came to mind. We almost forgot about the sides as the beef was stealing the limelight however it would be rude not to mention the assortment of Indian breads including naan and roti, all glistening with butter ghee and garlic. These were the perfect vehicle for the black lentil daal that was served as well.

Bottomless drinks are available for two hours and include Cobra beer, house wine, prosecco and soft drinks. The inclusion of beer, wine and soft drinks made for a nice change to most brunches, which tend to offer just the one drink, typically leading to a mimosa-related hangover! We also chose a classic old fashioned­ – a recommendation of the waiter – happily opting for their Indian take on it which included a subtle hint of cinnamon. It’s not always wise to mess with the classics but seeing as cinnamon pairs delightfully with whiskey and bitter orange notes, we gave this adaptation a thumbs up.

And, to keep stomachs lined, I highly recommend delving fork first into Farzi’s exemplary dessert platter, featuring candied sweet lime fondant with lemon cannelloni, strawberry short cake and the best coconut sorbet I ever did eat! Farzi Café’s mission is to get Indian cuisine back “in-Vogue” and certainly dispels the inherited view of Indian resto interiors being stuck in the 1980s with their beige, leather embellishments. Farzi is luxe and the food follows suit with its modernist influence leading to customers being shy to ruin the artistic decadence in front of them. Big on table theatrics but at a low cost, Farzi Café has a lot of qualities I look for in a restaurant; reasonable prices, funky looking dishes and service with a smile.