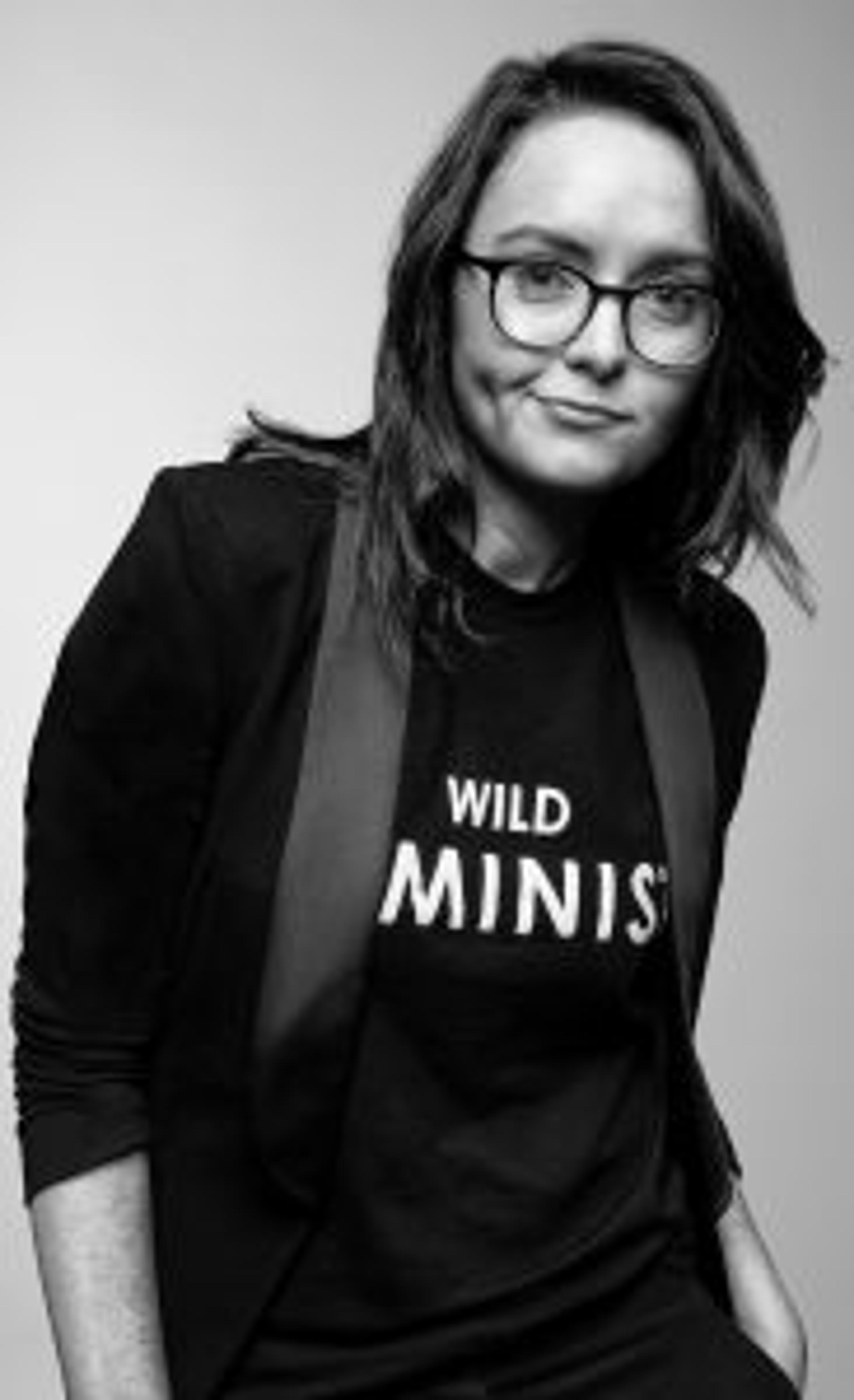 If you are looking for a solid kick up your butt this week, our chat with Emma McIlroy is sure to deliver that in a swift and exacting manner.  From

If you are looking for a solid kick up your butt this week, our chat with Emma McIlroy is sure to deliver that in a swift and exacting manner.From starting a sorely needed brand, Wildfang (wildfang.com) , through her inspirational TedX talk on being a ‘yeah, maybe’ hustler, Emma is the person we need in our lives when things are getting a bit stagnant or complacent.

We spoke to her about the growing political stance of Wildfang, the unique collaborative environment of Portland, where she and the brand are based, and plans to continue the WildFang takeover.

HOC: Hey Emma! The well-documented story of the origins of WildFang place it as an epiphany you and your best friend Julia had while pondering why men’s style clothing wasn’t readily available for women. At the time you were working full-time at Nike – how did that set you up for entrepreneurship?

Emma: It’s really interesting as it was Julia’s idea and in that moment I thought, I can’t leave Nike but if you want to build this – I’ll help, I can work in your store at the weekends! I grew up in a small town in Northern Ireland and my dad was a retailer in that town. I saw how hard that is and that the level of service people expect is so high – you disappoint one person and that news goes right down the street! So I’d never wanted to do retail for this reason. However, the more research we did the more we realised it had mass appeal. While I was trying not to go into retail, the idea for WildFang had real merit!

At the time, I was working at Nike – which taught me both a lot and nothing! In terms of what I did learn a lot about, Nike is incredibly consumer-centric – every department is obsessed with the consumer! I worked on the Nike + products, which – as a new digital product- meant that everything went wrong. I remember a runner writing to the VP of the running department with a complaint and that VP took time out of his holiday to write a 4 page response. That really set the tone for me about how the consumer fits into the picture. Now, with WildFang, if we fuck up, I get right on the channels and apologise and we also listen, some of the best new ideas to come into our business have come from single consumers and a great idea they have.

So when it comes to knowing nothing… I thought I was really good at something as a Global Brand Manager at such an established brand. With that comes established doors of opportunity and a existing community to network with. I had a total John Snow moment when starting out with Wildfang – it was such a different proposition and I knew nothing!

HOC: And since then, the brand has evolved so much, recently raising $250k for RAICES charity through the sale of your “I really care, do u?” jacket in response to Melania Trump back in June this year. You say yourself that the brand took a different turn in 2016 and became more political, can you tell us about that?

Emma: Sure, it was really after the election that I realised we needed to use WildFang for good and make a positive impact. On the night of the election, I’ll be frank, I didn’t know if this company had a future. We’re a bunch of brand marketeers so we throw one hell of an event and we had 600 people at our election party [Editor’s note: ready to celebrate the first female president]. As you can imagine, it turned into the saddest party ever thrown with a room full of people crying who were utterly devastated.

I wondered if our brand and the target market we had in mind was all wrong and if we were way off the beat of what people wanted for this to happen. The next morning we held a team meeting to see how my team was feeling – everyone shared a feeling of complete despair, but for varying reasons – some of my team were worried about their rights to abortion care, a trans-man in our team was concerned about whether he had rights at all, another woman was terrified of what losing Obama care could mean for her and the mental-health medication she needed to live her life.

For the next 3 days we didn’t share anything commercial online – on newsletters of our channels. This wouldn’t be such a big deal for a large corporate but as we literally keep an eye on every dollar coming in, not sending out emails like our new arrivals one that comes out every Wednesday was a big deal. But we didn’t think it was right to push products until people had had a chance to find themselves again after the news. I wrote a letter via newsletter to our fans to share that we were also devastated and that they were welcome to contact us via social, email, phone – that we were there to listen.

Those 3 days were the our biggest 3 days of the year. I went from thinking ‘Oh fuck, did we choose a target market that doesn’t exist?!” to THIS!

HOC: That’s incredible, tell us a bit about the team you have around you at Wildfang?

Emma: My team work so hard and believe me I would pay them all the money in the world if I could, but we pay a totally normal salary. The reason they come to work everyday is that they believe they are genuinely helping women’s lives. We give tonnes of money back to charity and every level of Wildfang believes in what we are doing – it’s not just talk, we all live and breathe it.

I have to think about the decisions we make as a brand as a decision I make can affect my team. For instance, I wanted to run an IndieGoGo campaign to support the Sioux Falls Planned Parenthood Clinic in South Dakota where one of the options was to fund someone’s abortion. Obviously, that’s controversial but I’m pretty courageous as a queer, immigrant women!

I knew this would affect my team. It’s one thing if someone comes and threatens me at my house, but what if someone came into a store and threatened my staff? I brought my team together and explained what I wanted to do and gave them the opportunity to email me if they weren’t comfortable with it. Instead I got emails saying ‘let’s fucking do it!’. I don’t have 10 levels of marketing team so we can make decisions based on what feels right in our gut. Sometimes this means we make mistakes and we handle those mistakes with integrity.

HOC: How do you find the right people for your team?

Emma: Hiring has got to be the hardest part of my job. As we grow, it’s easier to understand the skill set we need but cultural and attitude fit is much harder. The best people have both hustle and personal accountability. Joining a start-up is hard and isn’t right for 99.9% of people. I don’t mean it to be judgemental but it’s not the place for most people!

We collect resumes as we go and recruit from our own networks. It’s also crucial that our team love the brand – that in itself tends to attract the right people.

HOC: You are based in Portland, how has the city shaped WildFang?

Emma: Wildfang would have looked very different in another city. Portland made Wildfang and shaped our brand values. It’s a very positive, can-do city and there’s a cheeky, quirky spirit to Portland; it doesn’t want to be LA or NY.

Collaborative spirit is an overused term and can come across pretty soft. But for us, here in Portland, collaboration isn’t about money or “doing good”. It’s about making a great product. We built our retail store here on a super tight budget, working with 12 artisan craftsmen and women. They all came together and decided that they would help us build it and worked on the part of the store they were most positive about.

We work on all kinds of weird and wonderful collabs with other Portland brands: last year we made a beer where everyone who worked on it was a woman, which is that industry is pretty impossible [Editor’s Note: see v12 of House of Coco for more on this] and a wine in a can with Underwood where 100% of the profits went to Planned Parenthood.

We’re not getting in a room and singing Kumbaya – we’re all obsessed with making a great product.

HOC: There seems to be more and more brands getting on board with political messaging, what are your thoughts on this?

Emma: You’re right, people say to us that they’ve seen the ‘Wild Feminist’ space explode since 2015 and hey, you know what, as long as they are walking the talk – considerate of body type, ethnicity, gender etc –they are welcome to the club, there’s nothing wrong with that. I’d love nothing more than people coming into the space.

I do get pissed off when we get copied by people without values, places like Forever21 have completely ripped us off in the past. We own the trademark for ‘Wild Feminist’ but lots of things aren’t copywritable.

HOC: We’re inspired by your story so far and look forward to what comes next. What’s happening for Wildfang for the rest of 2018?

Emma: We opened our second brick and mortar store in NYC earlier this year at 252 Lafayette alongside Maison Kitsuné, Scotch & Soda and Supreme. It was 5 years coming so is hugely exciting for the brand. We also launched our workwear collection this year so expect to see more from that…

With that, with dial off our nearing 1 hour conversation with the awesome Emma, fired up to step up, lean in and be more conscious consumers. How often can you say a fashion brand has had that affect on you?

Find out more about Wildfang at wildfang.com and explore more of Portland’s creative landscape at TravelPortland.com