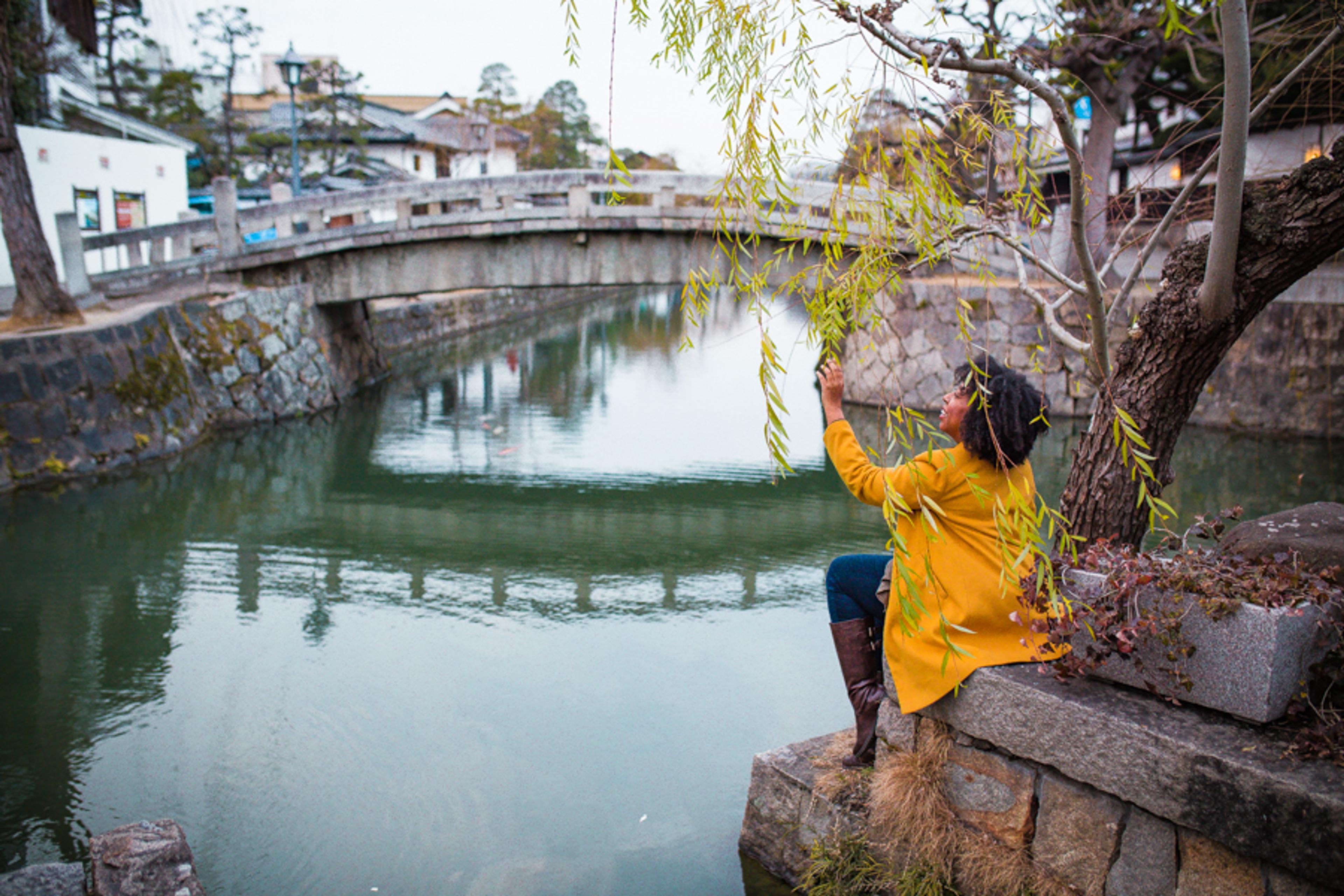 Every three years, thousands of visitors descend upon the Seto Inland Sea for the Setouchi Trienniale Art Festival.

Every three years, thousands of visitors descend upon the Seto Inland Sea for the Setouchi Trienniale Art Festival. Discover an art lover’s paradise within the Setouchi islands as Eulanda takes you on a multi-island journey over six days within our Setouchi Island travel guide.

Arrive in Tokyo, and head to Tokyo Station Hotel. If it’s day time, ignore the urge to sleep, and hit the streets of Tokyo for Japanese fare. Kick-off your night with a mixed selection of yakitori and sake at Tokoshima in Sangenjaya. Here, you’ll find Chef Tokoshima serving Tokyo’s popular grilled chicken staple.

Double rooms at Tokyo Station Hotel begin at £323 per night.

Grab a traditional ‘ekiben’ Bento box, and take the direct Nozomi bullet train south to Okayama station. Upon arrival, taxi into town and check in to Ryokan Kurashiki; a traditional Japanese inn where the rooms are outfitted in tatami mats and sliding doors.

Here, the historic town of Kurashiki with it’s striking white walls and merchant townhomes, transport visitors to the Japan of yesteryear.

Take several hours to explore this picturesque city by foot. Once you’ve satisfied your curiosity, head to Tsuneki Tea Shop for a cup of roasted green tea (hōjicha). The owners of the tea shop are always on hand to give a warm welcome to each customer.

Upon returning to your room, don your Yukata robe and head to dinner at Ryokan Kurashiki. Their ten-course feast is an immaculate experience from start to finish.

Double rooms at Ryokan Kurashiki begin at £206 per night.

After a traditional Japanese breakfast at your ryokan, catch a ferry to the island of Shodoshima. Step foot into the ferry terminal where you’ll be greeted by an installation featuring glass balls and cloths used to make the sounds of taiko drums. This ripples across the exhibit, where clothing designs of Junko Koshino can also be viewed.

Next, visit MeiPam Yokai Art. Yokai is representative of the animistic roots of Japanese culture; often depicted in the form of figurines and sculptures. Seek out the work of Chubei Yagyu and Mitsuo Takeda–two artists out of the one hundred featured onsite during the festival.

Stone is the medium of choice for Takeda’s work, who believes that it “holds the smell of thousands of years of energy.”

End your day in Shodoshima with a stay at Mari Ryokan. With its east-meets-west decor and architectural design, Mari Ryokan fuses modern boutique elements with rustic Japanese design.

Double rooms at Mari Ryokan begin at £450 per night.

Start your day touring part of the 88-shrine pilgrimage at Joko-ji temple (Temple 8) located on Mt. Goishizan. Be prepared for a light hike, as full views over the Seto Inland Sea can only be seen upon ascending Mt. Goishizan.

Upon descending Mt. Goishizan, head to Tonosho port to catch a chartered boat to Naoshima; the most well known of the art islands.

Only a short walk from the ferry port, located among the art houses of the Honmura district, indulge in a vegan feast at Aisunao; a restaurant with a design aesthetic that can only be described as ‘hipster meets artist.’

Following lunch, check in to Benesse House; a hybrid between a contemporary art museum and a sixty-five room hotel. Explore the property’s onsite installations and then catch a complimentary hotel shuttle, and spend the afternoon exploring nearby museums.

One of three museums designed by Tadao Ando along the shuttle route is Chichu Art Museum. Ando is considered the architectural grandfather of the Seto art island project.

The entire site is an architectural masterpiece from all angles. Ando insisted that the entire building (an ecosystem of geometric shapes) should be buried within the hillside, and every piece of art should be lit by natural light sources.

Head back to the hotel for a Setouchi seafood dinner at Museum Restaurant Issen or try dining on French cuisine at Terrace Restaurant.

Double rooms at Benesse House Hotel begin at £275 per night.

After breakfast, visit Yayoi Kusama’s iconic ‘Yellow Pumpkin’ located at the end of Benesse House’s picturesque pier. Kusama’s contribution to Japanese contemporary art can be experienced throughout the island.

No visit to Noashima is complete without experiencing Art House Project’s Minamidera. American artist, James Turrell’s immersive light installation ‘Backside of the Moon’ is located in the house structure; whose design was conceptualised by Tadao Ando.

Upon completing your museum tour of Naoshima, head to Miyanoura port to board Seto Yacht Charters for your pre-organised yacht transfer to the neighboring island of Ogijima.

Ogijima is one of Japan’s infamous ‘cat islands.’ With a little over 150 human residents, Ogijima’s furry counterparts and unique art installations attract 154,500 visitors per year–with a bulk of footfall due to art-related attractions.

Take time to explore the steep alleyways; where creative installations lurk at every turn. Fourteen permanent art pieces from previous festivals can be viewed on the island, but several indoor pieces are closed during winter months.

Head back to your yacht charter, and sail towards Takamatsu port. Upon dropping your belongings off at Hotel Ofutei, explore Tomonoura by foot.

Day rate onboard Seto Yacht Charters begins at £941 for up to 10 people. Double rooms at Hotel Ofutei begin at £282 per night.

After breakfast, take a ferry from Tuneishi port to Momoshima island. With a population of 350, the island has seen its numbers slowly increase as it’s attraction grows amongst artists looking for spaces to create small and large scale installations.

Our guide explained that artists often relocate to Momoshima to find abandoned homes. They work with local organisers to contact the owner in hopes of gaining permission to occupy the premises. Several of the artists who’ve successfully found accommodation show their work at Art Base Momoshima.

Paying homage to the island’s aging population, Art Base is housed in a disused school building. Fans of Yukinori Yanagi will be delighted to find several large scale installations on and off-site of Art Base.

After making your way to Fukuyama Station, take the Sakura bullet train to Shin-Kobe station, explore the city, and enjoy a Kobe beef dinner at ISHIDA Kitonozaka.

Later, take the bullet train back to Tokyo and check-in at Marunouchi Hotel, before catching your flight home the next day.

Double rooms at Marunouchi Hotel begin at £230 per night

More information on the Setouchi Islands can be found on setouchitrip.com/