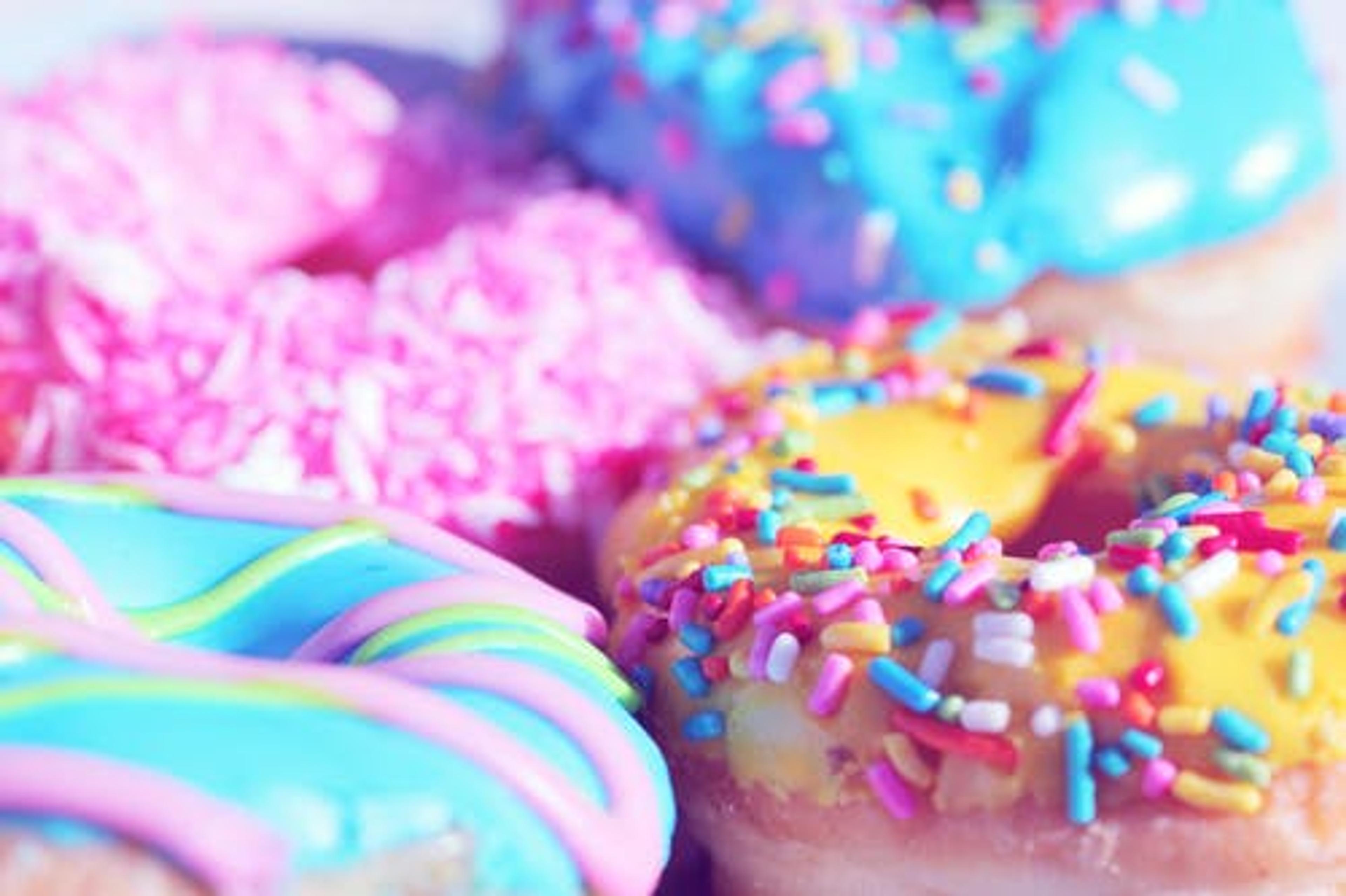 Donuts – the ultimate comfort food, and the ultimate thing to make your mouth water! You’ve got the boston cream, the bavarian cream (Check out more about these donuts here: https://www.fanaticallyfood.com/boston-cream-donut-vs-bavarian-cream-donut/) and so many others that you can enjoy. There’s a donut out there for everyone – you just need to give them a try!

As we will explore later, donuts didn’t become a smash hit until after the war, but they do have a rich history spanning back centuries.

In the times of the ancient Greeks and Romans, some form of the donut was already becoming fairly popular. These weren’t quite donuts as we know them today – instead, they were essentially tiny cakes, and these would then be fried and covered in a honey dop to finish. There were all sorts of variations of it throughout Europe. It wasn’t until 1750 that the word ‘doughnut’ would eventually be used in Northeastern England, however.

The original recipe for donuts were for simple glazed kinds. They were mainly popular in Hertfordshire in the UK, and when the colonization of New England occurred, the recipe for the donut made its way over to the United States.

But did the donut really originate in England? Some aren’t so sure. There’s information to suggest that the donut is actually a Dutch invention, with a very similar recipe to the donut as we know it being published in a cookbook called The Sensible Cook that was published in 1667.

The donut that we mostly eat today, however, is primarily something that was created in America – known as the cake donut. Oh, and the hole? Well, that exists most likely to ensure that the dough cooks more evenly and much faster. It’s not all that exciting – you may want to make up your own conspiracy theories for entertainment, and then confuse your friends with them.

America and The Donut – A Classic Romance

Donuts had been popular for quite some time, but it was in America that these sweet, delicious treats that we know today gained their mass fame. It’s possible that the love affair between America and Donuts can be traced back to as early as 1803, where a recipe was found in an appendix of American recipes in an English cookbook. Even back then, it was becoming clear that the donut and America were intrinsically linked. You can check out more about this in the book Glazed America by Paul Mullins.

Later in World War I, donuts were distributed to the American soldiers in France. Women known as Doughnut Girls would be in charge of ensuring that all workers on the front line had plenty of sugary treats to help them to thrive for another day. The same thing would happen again in World War II.

In 1920 the very first automated donut machine would be created by Adolph Levitt, and later a man named William Rosenberg would open up an unassuming donut shop in Quincy, Massachusetts. It was originally known as the Open Kettle, but the name later changed to… Can you guess? That’s right – Dunkin’ Donuts! By 1979 the shop had become a huge hit, with over 1000 Dunkin’ Donuts shops!

Everywhere you look today, at least in the United States, there is a new donut shop appearing. You would think that they materialize out of thin air! At the moment, Dunkin’ Donuts actually sells around 2.9 million donuts and donut holes throughout the world every single year. Donuts now aren’t what they used to be either. You can get all sorts of different flavors and styles of donuts besides the classic glazed donuts that we all know and love. Not only that, but donuts aren’t just for those with a sweet tooth anymore either. They’re also a fantastic choice for anyone that likes something savory, since you can get lots of savory donuts out there too. Even KFC has released a fried chicken donut sandwich. What will we see next?

A Donut For Everyone

We’re willing to bet that you’ve seen one of those quizzes pop up on Buzzfeed or some other site at least once. Something like ‘tell us your favorite donuts and we’ll tell you when you’ll get married.’ Well, an article like that couldn’t exist if there wasn’t a plethora of different donut options out there! Donuts today are almost like a fashion statement – there are premium options and also options for a smaller budget available.

For the time being, let’s talk about styles. First you have the classic yeast donut, with lots of airiness and fluffiness inside. These will usually have holes in the middle, or they may sometimes contain a filling such as jelly or chocolate. They tend to be sugary on top, though sometimes can have other toppings. There’s also the cake donut, circular with an obvious hole in the middle. They are slightly more dense than the yeast donut and you can get them in all sorts of flavors. You can get glazed donuts, which are essentially like cake donuts but with glazing on top, there are sugar donuts, churros, chocolate or strawberry sprinkles… There are so many options that it’s overwhelming.

Now onto the super fancy stuff! You can also find premium donuts on the market today, too. These aren’t your average sugar donuts from your local bakery. These usually come from gourmet places and can cost quite a pretty penny. They may contain slightly more unique fillings too, such as salted caramel, chilli cream and more. Some of these donuts are exclusives that you may only be able to get for a limited time, or only from certain stores. For instance, let’s talk about Dunkin’ Donuts. From Dunkin, they released a limited range of donuts in November 2020 including the Strawberry Peanut Butter donut, Sunburst, Chocolate Sundae and the Banana Peanut Butter donut. These donuts usually tend to cost more money because they are exclusive – it also takes a really long time to come up with new donut flavors!

Premium donuts are the kind that you would be willing to pay extra for in order to get something unique that will truly tickle the taste buds. They’re the kind of donuts that you can brag about to your friends, claiming that you’ve tried every one of them like the donut connoisseur that you are.

Donuts Of The Future

One thing is perfectly clear – donuts aren’t going anywhere anytime soon. In the future, we’re sure to see more and more delicious donut combinations cropping up, more premium options and plenty of supply of the old classics like the glazed donut.

It’s obvious that we have come a long way in the world of donuts since the days of the Donut Girls of the first World War. With so many different flavors and styles available, it’s difficult to imagine a world without these sugary treats. Now, the next time you head to Dunkin’ Donuts or Krispy Kreme, you can appreciate the history of the donut just that little bit extra. Now, go and grab yourself a donut – you’ve earned it!