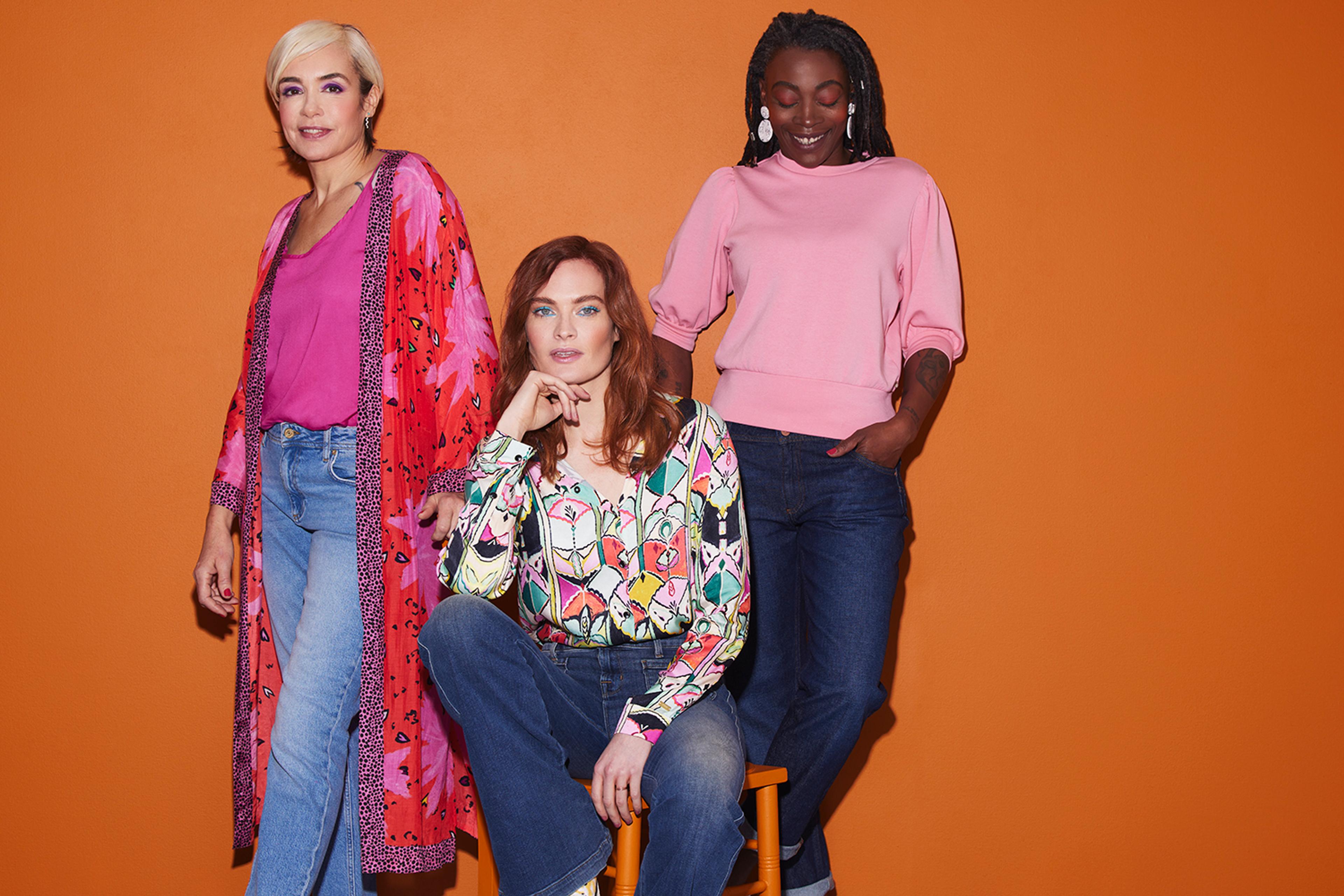 We caught up with Jacynth Basset about how The Bias Cut is cutting through ageist bias in both fashion and society.

“When I first started developing The Bias Cut in 2014, if you even muttered the words ‘over 40’, the majority of the industry would recoil in horror,” recalls The Bias Cut Founder Jacynth Bassett as she looks back on her five-year journey to fighting ageism in fashion. “Today, we are seeing more diversity in campaigns and on the runway. The industry is increasingly acknowledging age-inclusivity. But, so far, a lot of attempts to seem age-inclusive have been somewhat superficial.”

This industry’s tokenistic approach to age-inclusivity is exactly what The Bias Cut seeks to banish. Started with Jacynth’s minimal savings and with no leg-up in the fashion world, the business has grown to become beloved among woman of all ages from across the globe.

In this interview, we caught up with Jacynth to talk about the inspiration behind The Bias Cut, her game-changing ‘Ageism Is Never In Style’ campaign and how The Bias Cut is cutting through ageist bias in both fashion and society, one happy customer at a time.

Tell us a little bit about yourself and your background. What led to the creation of The Bias Cut?

Despite a life-long love for the fashion industry, at the age of 13 I decided I wanted to become a barrister. Committed to this, I went on to study Law at Cambridge. But whilst at university, I realised I didn’t want to follow a legal career path, and started considering business instead.

Creating a fashion business was the obvious choice. However, I knew I also wanted to address an issue I was passionate about. I had increasingly grown saddened and frustrated at how my mum was feeling alienated by the industry as she aged. I realised there was a need and demand to disrupt the fashion industry’s perception of age. It was clear that there was a gap for a brand that empowers all women at every age to embrace the best versions of themselves. And with that, the concept of The Bias Cut was born.

I started the business with my minimal savings and no prior experience or contacts in fashion, retail or marketing. So I developed, built and ran everything myself – from the website, sales and marketing. We started with just four small British labels, and now we have 30+ brands with customers spanning the globe.

While International Women’s Day has come and gone, what does its theme #BreaktheBias mean to you and how does The Bias Cut empower women of all backgrounds and ages throughout the year?

This year’s IWD theme #BreakTheBias couldn’t be more apt for us; it has half our name in it! I chose the name ‘The Bias Cut’ as a double-entendre– a reference to the famous cutting technique, but also cutting through ageist bias in fashion and society – so #BreakTheBias really does resonate with me.

To me #BreakTheBias is about exposing, uprooting and challenging gendered bias that exists both through society and within ourselves. When it comes to the ageing process, women struggle much more than men due to gendered ageism, which results in societal and self-imposed barriers, fed by prejudice, stereotyping, and the belief that a woman’s value is purely determined by her age.

The purpose of The Bias Cut is to empower women of all ages to confidently embrace and invest in the best versions of themselves today. From uniquely curating intergenerational independent designer collections, to featuring models of different ages, to our global community & campaign Ageism Is Never In Style community & campaign, The Bias Cut unapologetically celebrates all ages, ensuring all women feel seen, confident and valued at last whatever their age.

What are the challenges that older women face when shopping for clothes and how does The Bias Cut offer a solution?

At The Bias Cut we firmly believe a love for style and a desire to feel and look good doesn’t fade with age. But naturally our bodies do change, as do our lifestyles, our personal preferences. So the key is to offer clothes that understand and cater to this dichotomy.

The majority of brands fall into 1 of 3 categorises:

At The Bias Cut, not only do we actively welcome women of all ages, but we also understand women’s changing bodies and needs, and have a contemporary aesthetic. We uniquely curate our collections to reflect this. As a result, our collections are colourful, modern and chic, but also flattering.

What’s more, everything is modelled on women of different ages so our consumers feel seen. We offer tailored filters such as ‘shop by body shape’, so they can shop with confidence.

In your view – how can the fashion industry fight against ageism and be more inclusive?

In the past five years we’ve started to see more age inclusivity in fashion. When I first started developing The Bias Cut in 2014, if you even muttered the words ‘over 40’, the majority of the industry would recoil in horror.

Today, we are seeing more diversity in campaigns and on the runway. The industry is increasingly acknowledging age-inclusivity. But, so far, a lot of attempts to seem age-inclusive have been somewhat superficial.

Yes we’re seeing some ‘older’ models in campaigns or on runway, but typically these gestures are tokenistic, and the majority of said models are either tall, slim Caucasian with white/grey hair, or a supermodel/celebrity. What’s more, where brands appear age-inclusive in their campaigns, it it’s then lacking on their social media, on their website, within their team and most importantly in their designs.

Due to fashion’s undeniable influence over and connections with cultural and socio-economic attitudes and actions, the industry has a responsibility to challenge ageism and disrupt societal, prejudicial norms around ageing. Age-inclusivity needs to be embedded into the industry’s DNA. And the only way to address this is through education and continuing to raise awareness at every level.

Ageism is the last taboo, that we’re only really starting to grapple with. So we must keep having conversations on the topic, engaging, listening and learning, and actively encourage people in the industry at every level – from students to c-suite – to be involved.

Founded in 2016, Ageism Is Never In Style is The Bias Cut’s global age-inclusive campaign and community. Its mission is to disrupt and change the narrative around ageing, so it becomes a positive, inclusive journey where people of all ages are seen, heard and valued equally and collectively.

On social media we share news, inspiration, and spark conversations and debates amongst our community. On our blog, we regularly write in-depth articles, really getting to the heart of the issues. We also have free badges available for people to wear and share on social to further raise awareness.

‘Strike Out Ageism’ is Ageism Is Never In Style’s charity campaign, launched in partnership with charity Wellbeing of Women. The campaign challenges well-known ageist – and sexist – phrases and attitudes, transforming them into empowering statements. For example, we change ‘Still Got It’ into ‘Got It’ as the ‘still’ has ageist implications.

To support the campaign, we have launched an exclusive collection of t-shirts, sweatshirts, jewellery, bags and accessories. 20% of proceeds from sales are donated to Wellbeing Of Women, to help fund their pioneering research into women’s health.

What has been the biggest challenge you’ve faced as an entrepreneur so far?

I am an obsessive workaholic, and have long term mental health issues, so I’ve had to learn the importance of, and develop the ability to, set boundaries – both within myself and with others.

What’s next for you and your business? Any new exciting projects in the pipeline

We’ve just launched our Spring / Summer Collection, so we have lots of exciting drops lined up. This season is all about the joy of style, so it’s bursting full of colour and print.

We’re also currently developing our next Ageism Is Never In Style campaign, due for launch in late Spring, and relaunching my eponymous label, which I paused during the pandemic.

What advice do you have for those looking to take the leap and start their own businesses too?

Invest time in networking. It doesn’t matter how developed your business idea is, or how much experience you have, building a strong network is vital. I started The Bias Cut with zero experience or contacts in fashion, so I had to network relentlessly. I had to put my myself out there by going to dinners, drinks, talks etc every week, and I gradually built up a very good network to the point that one could easily make the argument that every success we’ve had at the Bias Cut – both internally and externally – has been thanks to the power of networking.