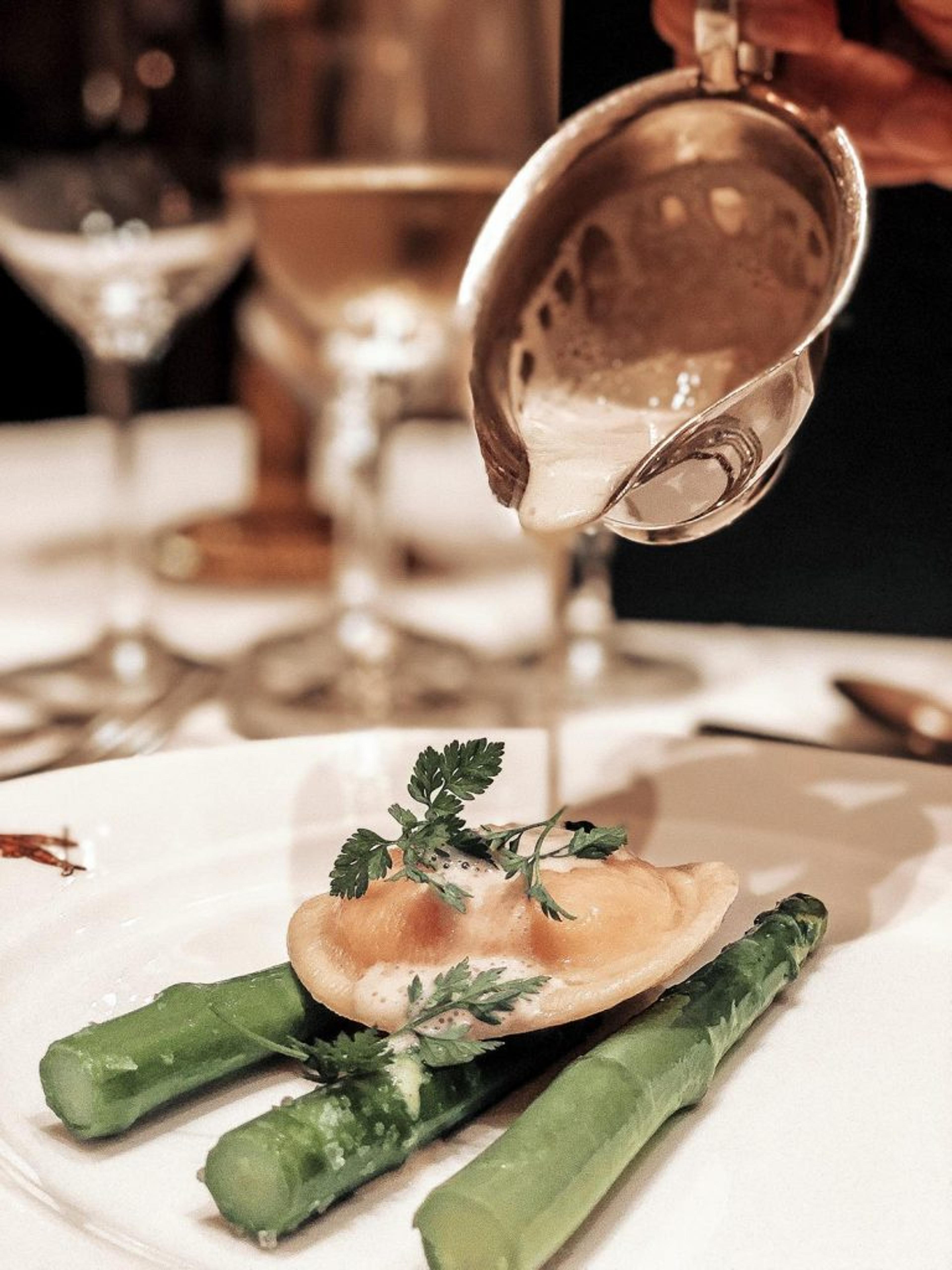 There’s a Nabokovian quote that has always stuck with me: “Caress the details, the divine details.” Here, Vladimir Nabokov was referring to prose and literature, his being some of the

There’s a Nabokovian quote that has always stuck with me: “Caress the details, the divine details.” Here, Vladimir Nabokov was referring to prose and literature, his being some of the best I’ve ever read. He somehow managed to pack in the smallest details without his prose being overwhelming or tiresome to read. His words were whirring around in my mind two glasses of Saint-Péray later as I, too, tried to tap into this mode of thinking—which didn’t prove too difficult, since Wiltons is all about the finer (and finest) details.

Perhaps the thought was triggered by the exquisite service and how the staff waft in around the restaurant with such ease and finesse. It’s the way they just know when you need an extra top-up of wine, the discreet method of tipping their elbows in unison and then floating away with an air of control and grace. Or perhaps it was triggered by the impeccably groomed interiors that are determinedly old school, like a time capsule transporting visitors back to eighteenth-century England. The velvety richness is a nod at a past era when silver-haired aristocrats would wine and dine in more traditional environs.

Then there are the details you can’t see at face-value, like the restaurant’s participation in the Chefs Against Plastic Waste (CAPW) Campaign, the first restaurant in the UK to do so. “CCS showed us jackets made from recycled plastic bottles (RPB) taken from the North Sea,” says Daniel Kent, the Head Chef at Wiltons, to combat the micro-fibre problem that is also polluting our oceans. “I got really excited; having grown up on the East Yorkshire coast, it just pulled at my conscience.” They have also stopped using plastic bottles which proves that, for a conventionally traditional restaurant, there is much more to Wiltons than its stalwart stoicism.

In fact, despite the expensive looking artwork and fancy toilets, Wiltons has a light-heartedness which can be found in the new Spring Dinner menu bursting with an exuberant palette of greens and springy yellows. The English asparagus with egg yolk raviolo and chervil velouté followed by poached sea trout with pickles sets the tone for the rest of the menu. The latter is served with petals in a gentle celebratory nod at the emergence of spring.

The main dish is then presented on a trolley in the spirit of decadence circa Dorian Grey, revealing a saddle of Rhug Estate lamb with spring vegetables and cauliflower purée. Naturally, a bottle of Domaine du Monteillet from Rhône Valley was popped open post haste to compliment the meat. While this is all going on, the staff move in time with each other as though performing a contemporary dance routine—the choreography so intact it could be taken from a West End show. And it doesn’t end there: dessert consists of creamy cow curd cheesecake, another vivid dish, followed by a sensible mint tea or coffee to complete the occasion.

Wiltons is unapologetically traditional and sophisticated, like a Capricorn. Just make sure to bring your all-time favourite people if the bill’s on you.