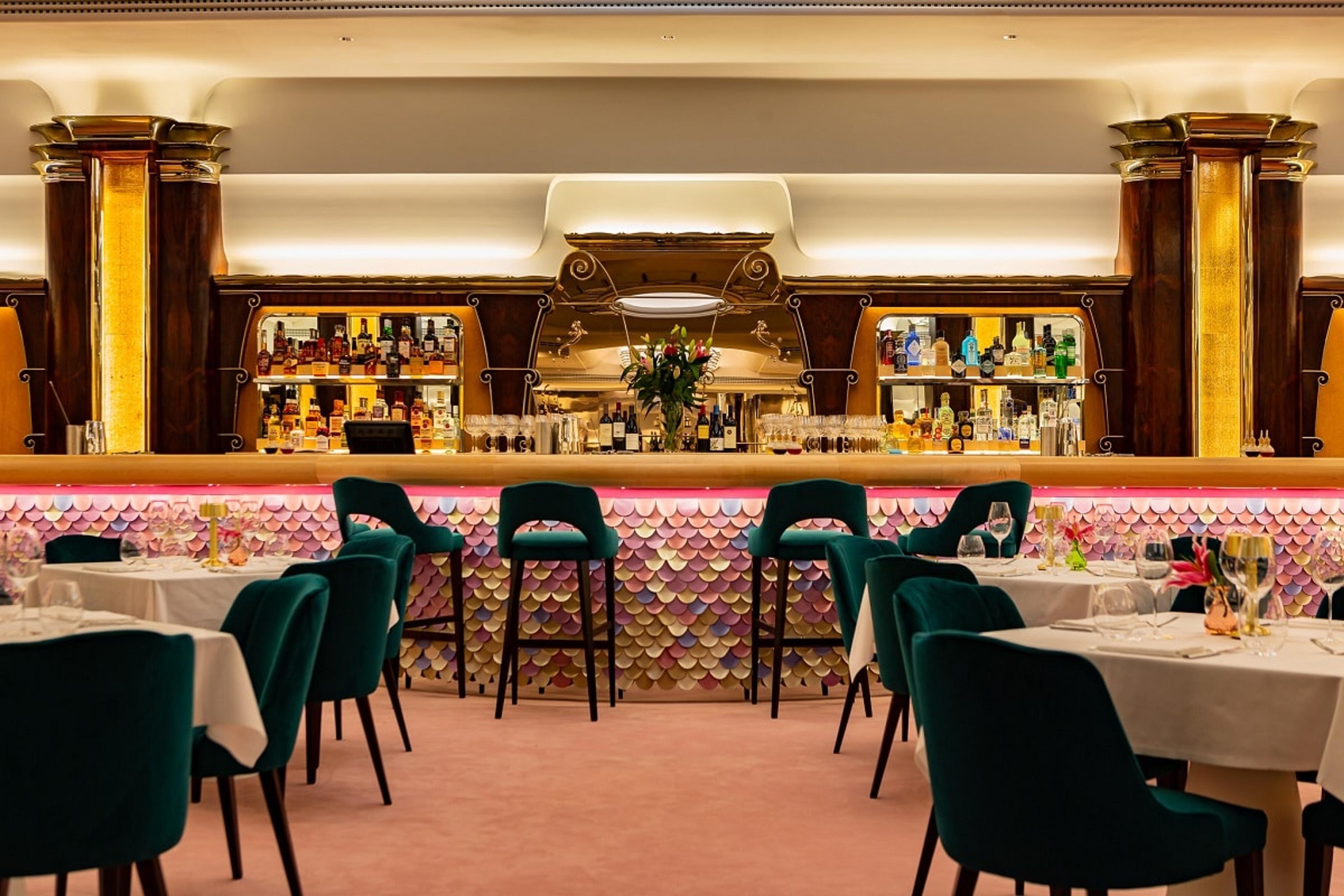 There is nothing shy about Park Row London, which takes its DC comics theme to superhero heights. Team Coco babe Hannah Tan-Gillies ventured into wintry Soho to see if the new theatrical gastronomy restaurant is worth the hype (spoiler alert: it is)

You enter Park Row London through a hidden door behind a book case, in what looks to be Wayne Manor. A dramatic entrance that appropriately previews what lies ahead for diners, in this bold new restaurant concept, by the Wonderland Restaurant Group and restaurateur James Bulmer.

You head down a winding spiral staircase to a superhero-inspired score. While Park Row London is located underground, (kind of like a Batcave now that I think about it) you won’t miss natural daylight here, as there’s plenty to feast your senses on.

The décor is Art Deco chic, with plenty of DC Comic-inspired touches that avid fans would easily spot. The handsome oak-panelled bar is called Pennyworth’s, while the Monarch Theatre (the theatre where Bruce Wayne’s parents were shot) offers a truly tantalising 11-course tasting menu complete with immersive visual experience.

The Iceberg Lounge is named after supervillain Penguin’s own club, (played brilliantly and unrecognisably by Colin Farrell in the latest Batman flick) and The Late Night Old Gotham Lounge, which we think is somehow related to the Joker (due to all the clown motifs).

Theatre is the name of the game here and it starts the moment you are seated. The Amuse-bouche is nitrogen-infused popcorn, served with flair by our very enthusiastic waiter. The popcorn is surprisingly chilly, but very tasty too.

We sampled the House Cocktail, a ‘Blue Boy’, which comes out from a replica of the Blue Boy painting and is a subtle reference to the Batman films. The Blue Boy (which is blue) is a delicious concoction made of Patron Reposada tequila, St. Germain Elderflower liqueur, Galiano L’Autentico Liqeur and RinQuinQuin – it certainly packs a punch but is appropriately fanciful for an evening at Park Row.

The menu too was inspired by molecular gastronomy, embracing the theatre and showmanship of Park Row. We started with the delicious Maki Roll, which is vegan and made with Miso Aubergine, Avocado, Cucumber and crispy shallots. The Scales of Justice, another Batman reference of course, was simply divine. Here, the aforementioned scales are seared Scottish scallops with Sirracha butter and puffed rice.

For Mains, definitely try out Gotham City’s Saviour, which is a grilled ribeye steak with béarnaise sauce that is cooked to absolute perfection. For a vegan option, the Pumpkin & Sage Tortellini doesn’t disappoint.

The appropriately named desserts will surely make you giggle. We like ‘Kiss From a Rose’, named after the sultry Seal track which was in the soundtrack of the first Batman trilogy films. Here, it is a lychee rose mousse with white chocolate and jasmine yoghurt ice cream, sweet and sensational, just like the track itself.

Our evening at Park Row felt like we spent an evening in Gotham City itself, and while the famed caped crusader wasn’t present per se, his spirit surely was felt in the quality, service and showmanship of Park Row London.