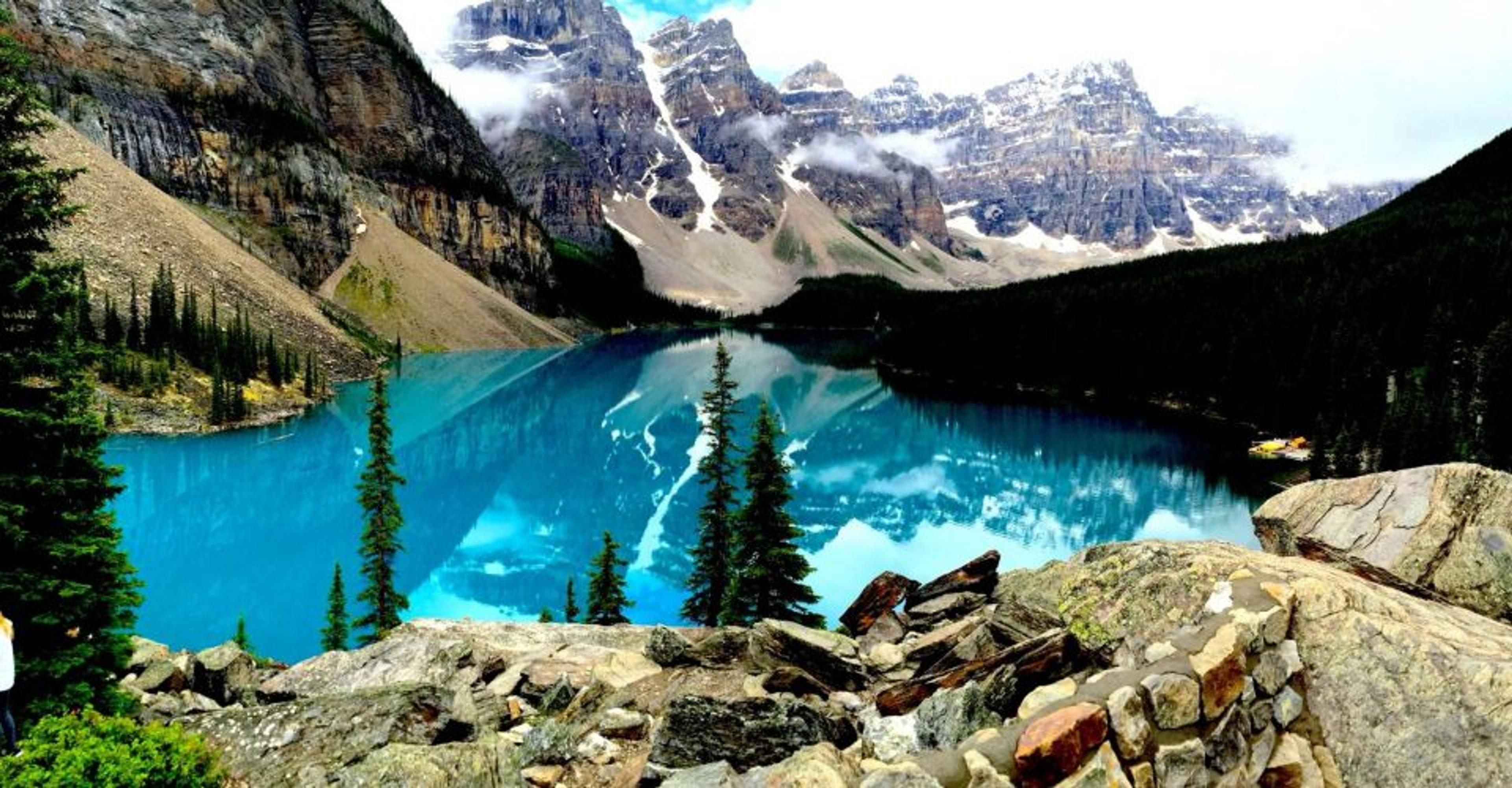 The Icefields Parkway is the beating heart of Alberta, and a drive across its season-altering 181 miles engulfs the mind in all the preconceptions one might have of Canada

The Icefields Parkway is the beating heart of Alberta, and a drive across its season-altering 181 miles engulfs the mind in all the preconceptions one might have of Canada before journeying there. Whilst most might sit bored during a road trip, conjuring up games of I spy, the famed Icefields Parkway makes no time for apathy. Passing between mountains drenched in snow that look akin to a Mac screensaver, to wide rocky riverbeds and cheeky mountain goats, the trip makes for a feast for the senses and becomes an eclectic extravaganza paved into your memory forever.

Describing it as magical seems an injustice. In fact, describing it at all is arduous, because this UNESCO World Heritage Site sits in the mind as somewhere you simply must visit in order to revel in the spellbinding nature of it all. The road trip is renowned for taking travellers from Jasper to Banff, traversing the beauty of the Canadian Rocky Mountain Parks World Heritage site from Jasper, along the parkway that leads to Banff, whilst soaring past eerily beautiful lakes, from Herbert to Bow and Peyto.

Places touched upon include Jasper, Kootenay, Yoho, provincial parks and Banff National Parks and, whilst it’s estimated to take a minimum of three hours, the many beauty indulging stops along the way accumulates many more hours on the clock. A stop-off at where the filming of The Revenant took place might be on your list. The movie that sees Leonardo Di Caprio fending off a grizzly and traipsing through billows of snow is filmed here, highlighting scenes that significantly reflect the weather conditions of Icefields Parkway. In fact, in no better capacity will you witness all four seasons in such a short space of time. The warmer climes of Lake Louise, Banff, turn to leaves in autumnal shades falling from trees, into gallons of shining white snow on top of mountains, that lie in fields jotted with babbling brooks and wildlife.

Wildlife is rife, from bears to bobcats; in fact, we got held up as an elk plodded slow as a snail across the road, causing lines of cars but no complaints. Seeing wildlife up close and personal aligns as one of the top highlights during a Canadian Rockies visit, and my eyes remained at all times peeled for a grizzly bear, unmistakable by their dish-shaped faces and muscular humped shoulders. Black bears too haunt the Icefields Parkway, plodding along and chomping on plants and berries to appease their omnivorous diet. Alas, I didn’t see a bear and decided wandering through the foliage to find one wasn’t the sharpest plan. Maybe next time.

The Icefields Parkway caters for a cold safari, with over 53 species of mammals and over 260 species of birds playing amongst its eclectic expanse. I clapped my eyes on woodland caribou and the occasional mountain goat, which was triumph enough for me. If you’re lucky, however, you may be able to seek them all out, with bighorn sheep, lynx and bobcats, marmots and ptarmigans flitting and scurrying about. Slow down the car as you pass through the Kerkeslin goat lick, just 15 minutes north of Sunwapta. Mountain goats congregate on the rocks, licking the salty mineral deposits left there, and show off their impressive footwork!

Animals aside, or blocking the road rather, the hair raising spot to begin your drive is Lake Louise. The dreamlike landscape was, quite possibly, the most beautiful place I’ve ever clapped my eyes on. The emerald green waters, offset by rugged peaks and glaciers, sparkle captivatingly. The Victoria Glacier acts as a tremendous pin-point before a trek about the area. However, if you’re unprepared to battle fellow tourists, I highly suggest jumping in a canoe and taking to the waters. You’ll paddle out and either sit dumb-founded in the centre as you take in the sheer velocity of it all or make your way calmly around the glistening circumference. Beware, the water is a chilling 5C at best, so it’s recommended you don the life jacket at all times, but afterwards you can clasp your hands around a hot choc at the Fairmont Chateau Lake Louise and replenish lost heat.

Waterfalls, too, dominate the Icefields Parkway. Athabasca is perhaps the most impressive, with its bright blue waters set against mountainous backdrops. It’s an idyllic area to explore various trails and capture the sunset alpenglow. Sunwapta Falls also make for a popular stop-off. Descending into deep limestone gorges, the falls feed off the Athabasca Glacier, and boast the same icy blue tones. For a place to stop and refuel between the falls, swing by Communitea Café, a favourite of Matthew McConaughey and family. The adorable spot can be found serving up delightful, fresh and Instagrammable bowls, snug in Canmore, and replenishes the body before journeying on.

Living up to its namesake, this road trip also sees nomads trek across the largest ice field in the North American Rockies – the Columbia Icefield. You can admire its 325km expanse from the Highway, or board an enormous bubble-wheeled bus and indulge your inner Colin O’ Brady. Moving on to another day, you can reach the Parkway’s highest point – Bow Summit – at approximately 7,000 feet. Out with the camera for views of a lifetime. A trip onwards to Peyto Lake and a viewing point there will see you in utopia Canadian style. Still following the Saskatchewan River, take in spectacular falls and don’t miss glancing the fauna and flora as it all blends to make up this huge natural mural.

Time for a refuel? Obviously, the tea stops, restaurants, hotels and so on, have names as intriguing as the natural sights themselves. For instance, the Num Ti Jah Lodge by Bow Lake, for a room and food. Baker Creek Mountain Resort, Banff Tea Co tea shop and Lake Agnes Tea House to name a few, will help plan refreshing, relaxing and reflective road stops. And, if it is tea you love, then join the trail to the Plain of Six Glaciers Tea House, close to Mount Lefroy on the Continental Divide close to the Victoria Glacier – a favourite tea house hike apparently!

Venturing on, somewhat akin to Iceland’s Blue Lagoon, the Kananaskis Nordic Spa is a 50,000-square foot alpine retreat that can also be found along the drive. Sitting just 45 minutes southwest of Calgary, the spa is cradled by mountains and wildlife, and submerges you in relaxation. Here, you’ll find five pools that differ in temperate, including Banya, Finnish and Barrel saunas, and an Alchemist and Eucalyptus steam cabin. You feel immediately at one with nature, amongst rugged peaks and tartan dressing gowns. Alberta’s Kananaskis Nordic Spa is somewhere where you don’t even want your phone – there’s something far too tranquil, too Bear Grylls about it all that technology just seems rather alien.

What are the best sights? How long is a piece of string? Reading up pre-visit will enlighten you to all there is to see and do on the Icefields Parkway drive, with photos, information, booking telephone numbers and all. Maybe these few tips will start you off on a search. Canada is a North American country where star-washed skies, intimidating forestry and stumbling across mesmerising bodies of water are a given, alongside the odd glimpse of the Northern Lights, flittering past as you drive amongst snow-capped mountains.

I couldn’t get enough of the dizzying drive and my travels along it. The iconic drive, which rivals that of Route 66 in my eyes, stretches 232km’s and amounted to around five hours of driving during my visit. It really stuck out as a drive that needs devotion. Whether it’s Pyramid Lake Resort or Athabasca and Sunwapta Falls, there’ll be no utterings of “are we there yet?” going on during the Icefields Parkway.