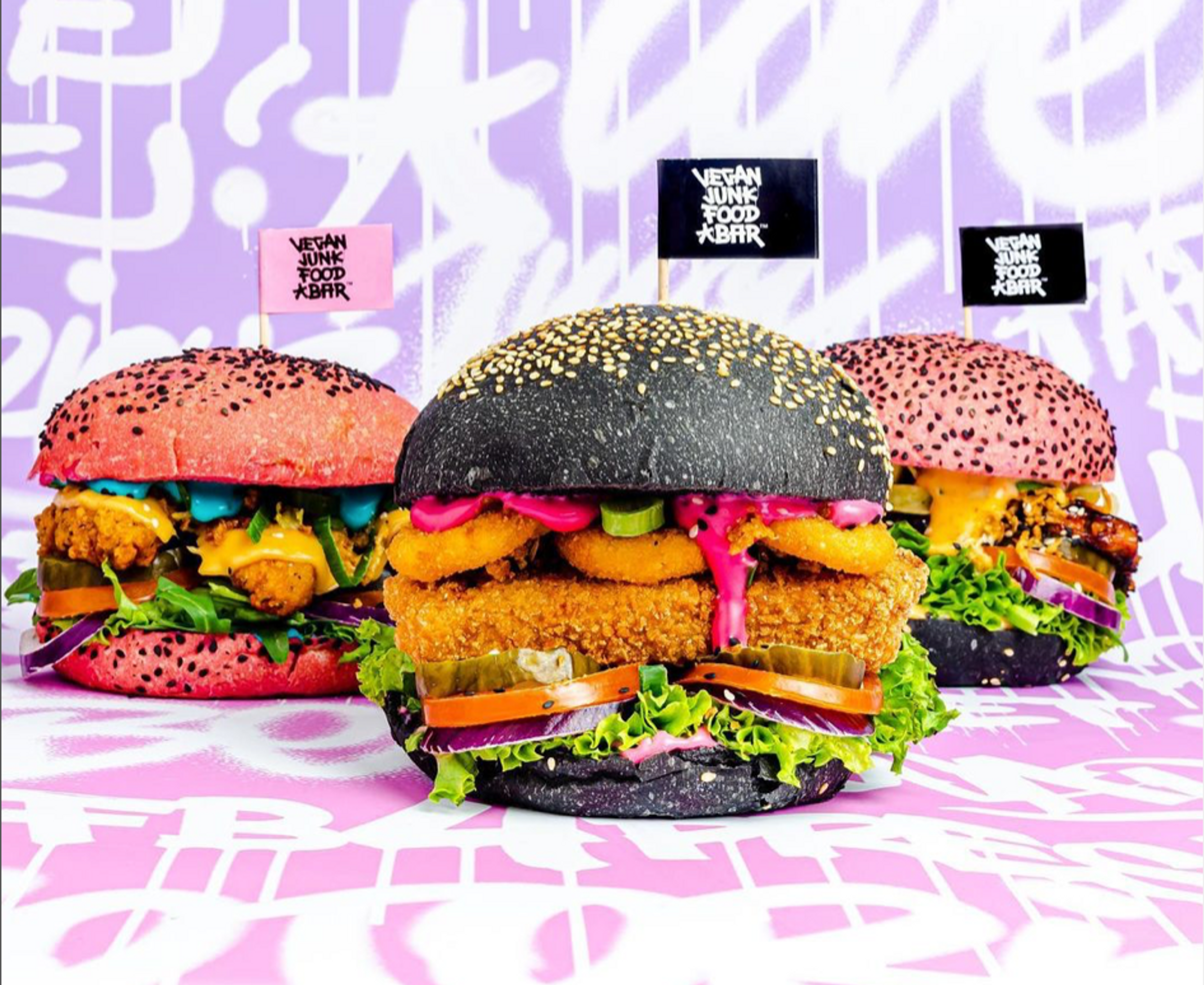 After the best vegan restaurants in Amsterdam? One of the prettiest cities in Europe has some amazing places for delicious vegan food, as recently tried and tested by myself, naturally! Whether you’re into dirty vegan food (I’m talking the best burgers you could think of) or a healthier plant-based meal, the Amsterdam vegan scene has you covered.

A trip to Amsterdam wouldn’t be complete without a trip to the infamous Vegan Junk Food Bar. I had high expectations for this vegan Mecca and I wasn’t disappointed. Perfect if you want a meaty meal, that’s loaded with flavour and naughtiness. Expect vegan stacked burgers, rainbow coloured burger buns (optional!), hot dogs, loaded fries and mouthwatering sides. A complete feast and proof that vegan food is awesome.

Address: Reguliersdwarsstraat 57 1017 BK (this is downtown but there are other locations in the city)

This is a close runner up for my favourite vegan restaurants in Amsterdam! We had an insane lunch here and it was well worth the 10-15 minute walk, plus, it was lovely to visit another area of the city. Whilst this isn’t a vegan restaurant, there are plenty of vegan options and we opted for a sharing platter for two (‘a bit of this a bit of that’ on the menu) which was AMAZING. Honestly, I was in food heaven. My favourite kind of meal is one where I can pick at different bits, and this was perfection. We feasted on hummus (shock), falafel, pita breads, roasted eggplant, salad, cauliflower and more.

Again, not a vegan restaurant but there are vegan options on the menu and you’ve no doubt heard of Pluk already, it’s an Insta-famous Amsterdam hotspot. I had heard some negative reviews, but my experience was generally pretty positive, despite there being no vegan pancakes in stock on my first visit! As PLUK was conveniently located just down the road from The Hoxton we headed here for breakfast both mornings. If you’re vegan there are pancakes, I think some kind of granola and a ‘healthy breakfast’ which to my surprise I actually preferred as I found the pancakes a bit ‘meh’ when I eventually got to try them. Food aside, the interior is very cute and there are various different homewares on sale which makes it more of a concept store come cafe vibe.

Address: Reestraat 19 (in the 9 streets)

What started as a vegetarian restaurant, is now fully vegan, hoorah! The decor is a nod to New York’s meatpacking district, hence the name. On the menu you’ll find tonnes of creative healthy plant-based dishes bursting with flavour. Risottos, salads, soups, bean burgers and so on. It’s funny because to me, the name sounded as if it was going to be a cheap/dirty burger joint but it’s in fact totally the opposite! Worth a visit when visiting the city.

If you’re a vegan cheese fanatic, then Mr & Mrs Watson is the place for you. Serving up their famous homemade vegan cheese including a cashew brie and blue roquefort. You can even purchase some to take away with you! Menu options include a cashew fondue (umm yes please), cheeseburgers, soups, salads, sandwiches and even vegan sushi. It’s definitely one of Amsterdam’s best vegan restaurants.