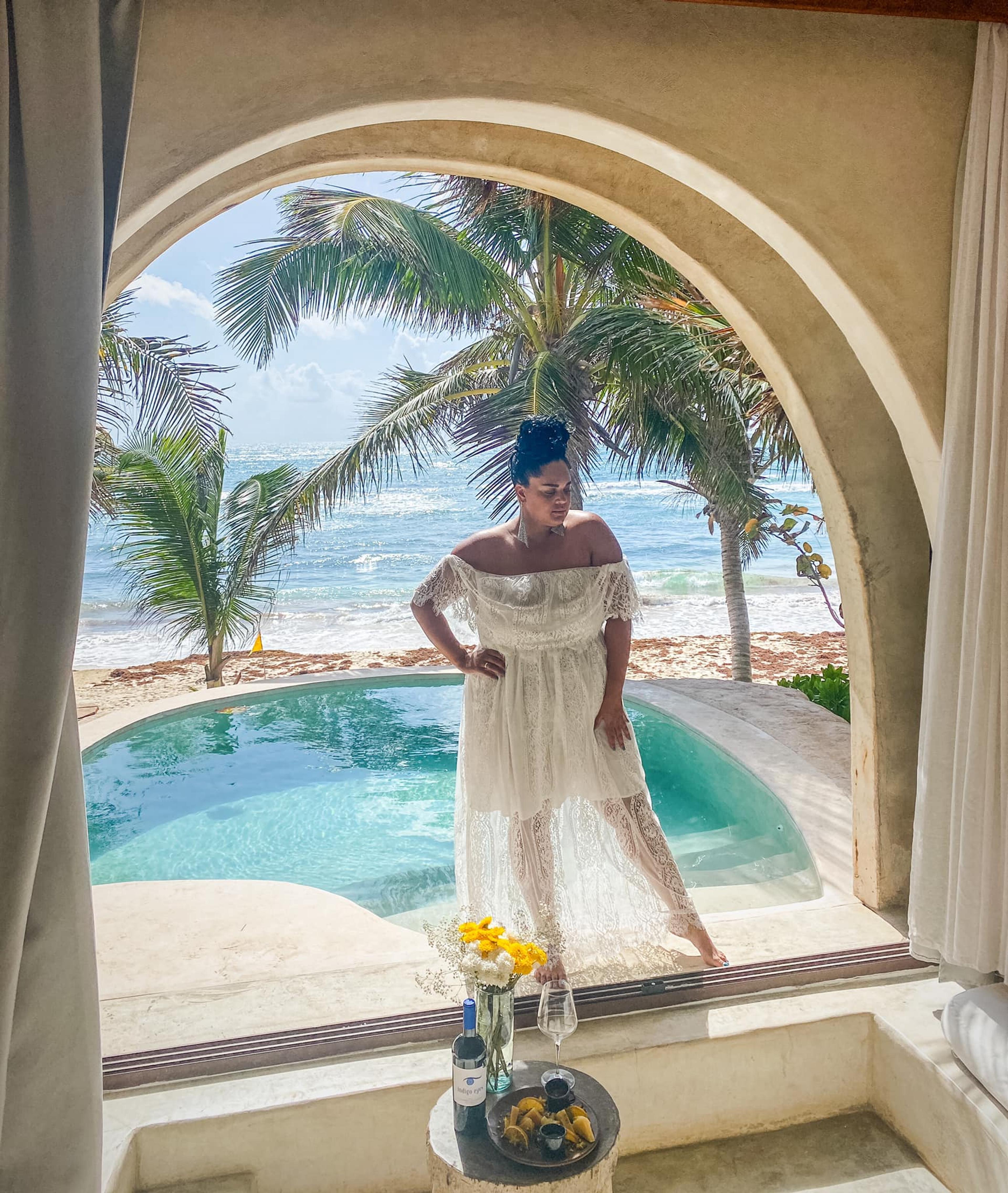 Finding magic and miracles : Why Tulum is calling your soul

The airline Tui has the tagline ‘be happy’ and when you fly with them to Mexico that’s exactly what you will be.

The airline Tui has the tagline ‘be happy’ and when you fly with them to Mexico that’s exactly what you will be. Laura Barlett ruminates on the magic of Tulum

Setting off from Manchester on the T123 flight I was full of excitement and intrigue. I’d only ever visited Mexico for a few hours when I walked over the border from San Diego to Tijuana and had a crash course in all things Mexican. I ate tacos, drove around in a converted school bus and ate a caesar salad in the original Caesar hotel. But a few hours wasn’t enough to become truly immersed in what Mexico is really about. Which I now know is magic and miracles, but I don’t want to get ahead of myself just yet.

The flight was seamless and when we touched down in Mexico and the Tui staff opened the doors with huge smiles on their faces, it was as if they knew that what was about to come over me during my trip was way more than just the heat. Jumping into a transfer from the airport – after picking up a margarita whilst I waited, obviously – I was soon on the 90-minute ride to my first stop in Tulum.

The Kimpton Aluna hotel is in the popular and cosmopolitan Aldea Zama area and it was to be my first home during my stay. Check-in consisted of writing down something negative that I wanted to leave behind and then burning it in the popular Mayan ritual before making a wish. This welcome set the tone for the entire trip and, from this moment on, all that occurred was positive vibes aplenty, with a side serving of magic.

After dropping off my bags, freshening up and picking up a fresh green juice in the hotel’s restaurant, the beach was calling my name. At first glance, Tulum Beach is nothing special in comparison to the others. Crystal clear waters. Check. White sand. Check. But what the others don’t have, that this beach undoubtedly has, is the vibe. It’s not even something that the 26 letters of the alphabet could ever let me express in words. It’s a feeling that, once it touches you, your life will never be the same again.

When you sit on a beach in Europe you’ll be badgered every two minutes by a third-rate hustler trying to sell you items that will corrupt your life or, better still, break faster than you can say the words ‘corruption and lies’. But on the beaches of Tulum, you’ll find people trying to nourish you with vegan food, keep you watered with fresh juices and encourage you to spend more time looking through your third eye than the other two that the world can see. On the European beaches, people are searching for love, but on the beaches of Tulum people already know that they ARE love. Everyone is in their own bubble, high on life, and judgement has no place here.

Whilst drinking the best coconut water my mouth had ever experienced, picked up from Matcha Mama, as the waves were lapping and people were playing drums and dancing without a care in the world, I had a moment of reflection where I thought, isn’t life a miracle and wild at the same time? It’s like no matter what path we’ve all taken in life, what pitfalls and achievements we’ve endeavoured, every single decision brought each of us to this very moment that we’re in now. And while you might not even speak to your fellow sun-seekers other than a courteous hello, it’s almost like the unspoken truth lies in the air that your soul brought you here. To Tulum, to this beach and to this very moment. This very moment that once it’s passed cannot ever return, and that right there is the single biggest reason why we have to live in the moment. For it is all that we have. And if you can’t be present in Mexico, then you can’t be present anywhere.

With so much on offer, I reached out to Tulum Hype via Instagram to get the lowdown on the best things to do while I was in town. On my second night, they hooked me up with a reservation at one of the most exclusive restaurants in the Beach Zone, Negra Restaurant. I was dining solo but the staff were so much fun I felt like I was hanging out with my mates. I danced, smiled and laughed with my fellow diners and felt like a spoiled queen while the waiters finished off my sea bass table side, all while enjoying the sweet liquid gold that is a classic margarita, Mexico style. I noticed groups of girls and guys at the tables next to me, who hadn’t glanced up once from their phones. Flicking from app to app to show the world that they’re having a great time and living their best life in the virtual world, they seemed to be totally missing the entire point of our human existence, which is to live in the now and be present. Clearly, they cared more about looking happy on social media than being happy in real life which, sadly, is the single biggest mistake our generation continues to make.

After dinner, I hopped into one of the cabs that were waiting outside and the drive out of the beach zone was like driving through a Jukebox, with the eclectic tunes playing out from the different bars and restaurants as you drive by. From Nelly to Broomsticks, I relived my childhood, my teenage years and my later years, driving by the different bars with their different music giving me a mezcal-strength shot of nostalgia.

There’s a saying that you have to see it to believe it. But in Mexico, you don’t have to see anything. You only have to feel it. Zama, Pueblo Magico or Tulum. Whatever you call it, it will always answer. I was more present during my seven days in Tulum than in the last seven years. And, on my final night, I caught myself in a moment where I was looking up to the sky. It was like seeing the stars for the first time, everything seemed so magic and bright. There were a lot of stars in the sky that night, but then again, I was on my third margarita… so maybe I was seeing double.

Blow the budget and book a night at Papaya Playa. The hotel comes alive at night time and it’s like an adults playground with giant colourful mushrooms and lights dancing through the forest. Waking up here with your own private pool and view of the ocean is a serious treat for your soul. Expect barefoot luxury and spiritual energy unlike anywhere else in the world.

Matcha Mama quickly became my favourite place to be. I spent most mornings in one of their locations, listening to the reggae music that they played while drinking one of their fresh juices and enjoying a healthy smoothie bowl.

How to get around

ATV Tulum is the go-to place when hiring a quad. It’s the best way to get around in Tulum and you can drive them freely but make sure you’re wearing a helmet – as the police might stop you if not.

There are endless choices of things to do in Tulum. Whether you’re there to party or you want to go zen, Tulum Hype is the company to know. It’s like having access to the little black book of contacts and they’ll hook you up with the best things to do, cenote tours where they take the hassle out of everything and dining options that you otherwise wouldn’t know about.