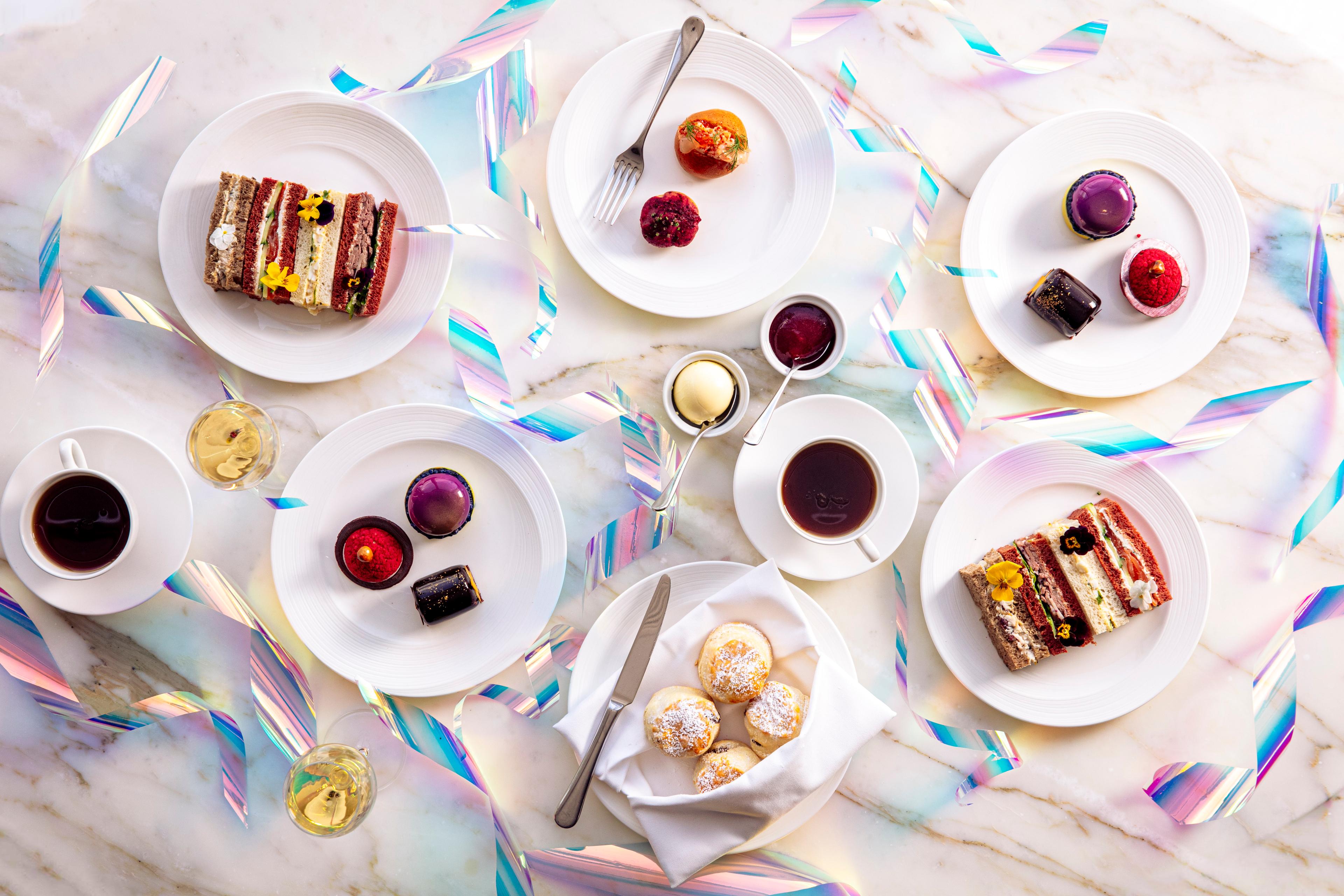 Here at House of Coco Magazine we're the opposite of Grinch, we absolutely love Christmas and the earlier people talk about it each year, the happier we are. One thing that we love most is mooching around London during the festive period so that we can ogle at the best Christmas trees in our favourite hotels. And our friends at the Shangri-La The Shard, London always get it just right.

This year, they have welcomed the 2022 festive season by unveiling a cosmic take on traditional décor and a space-age Christmas tree designed by McQueens Flowers. This year, guests can get into the festive spirit with a Christmas Afternoon Tea featuring galactic-inspired pastries, or toast to 2023 at the hotel’s New Year’s Eve Party of the Future, with a satellite view over firework displays across the city.

Located on the hotel’s ground floor lobby, this year’s Christmas tree stands at an impressive 12 feet tall and is constructed using contemporary geometric metal cubes, preserved and dried blue, silver and gold florals, glittering disco balls and crinkled silver foil. In a space-age twist on traditional Christmas lights, bands of swirling neon light travel down the tree while changing in colour from purple to white.

Elsewhere in the hotel, McQueens Flowers has created a dazzling display of space-inspired Christmas decorations using navy blue pampas and dried foliage, vivid pink neon lights, as well as silver and gold disco balls and baubles, evoking a sense of fun and frivolity while transporting guests through space and time.

During the festive season, guests at Shangri-La The Shard, London will be able to make merry with a series of magical special experiences, including:

Until 31st January, TĪNG Lounge will serve a festive version of its Skyline Afternoon Tea topped with shimmering galactic pastries. The high tea begins with a winter-warming cinnamon, pumpkin purée and lemon welcome tea before a selection of smoked salmon and roast turkey and cranberry finger sandwiches, savoury items such as a prawn cocktail roll and freshly baked scones with jam and clotted cream are served. To follow the spectacular festive afternoon tea, guests will be presented with a spiced pear, vanilla and white chocolate Shard replica pastry to share, served over clouds of dry ice. A glass of Champagne, a decadent Milky Way cocktail with butterscotch syrup and almond milk, or a Spiced Apple mocktail are the perfect accompaniments to the futuristic Skyline Afternoon Tea.

Available daily from 12.30pm-4pm, from £69, or £79 with a glass of Veuve Clicquot Yellow Label or a Milky Way cocktail. ting-shangri-la.com.

On Christmas Day, a traditional feast will be served at TĪNG Restaurant, with roast Norfolk Turkey or miso glazed king oysters followed by traditional Christmas pudding with brandy custard, or a mouth-watering spiced chocolate mousse with orange sorbet. Guests are invited to enjoy the festivities complete with live music and stunning views of London’s iconic landmarks.

Boasting the best vantage point in the city to view the fireworks, including the iconic display at the London Eye that will return this year, Shangri-La The Shard, London will host a riotous series of celebrations across the hotel this year to ring in 2023, with a look towards the future.

Sky Lounge and the hotel’s entire level 34 will be transformed into a futuristic New Year’s Eve party from an alternative universe, complete with a five-piece band and DJ, as well as secret rooms to explore, karaoke, surprise entertainment and glitter and neon face painting alongside champagne, cosmic cocktails and canapés.

Meanwhile, GŎNG, London’s highest bar, will be closer than ever to the stars with a space-themed, Galactic New Year’s Eve party with a DJ, guaranteed window tables and Japanese sharing menus accompanied by Cristal Louis Roederer Champagne.