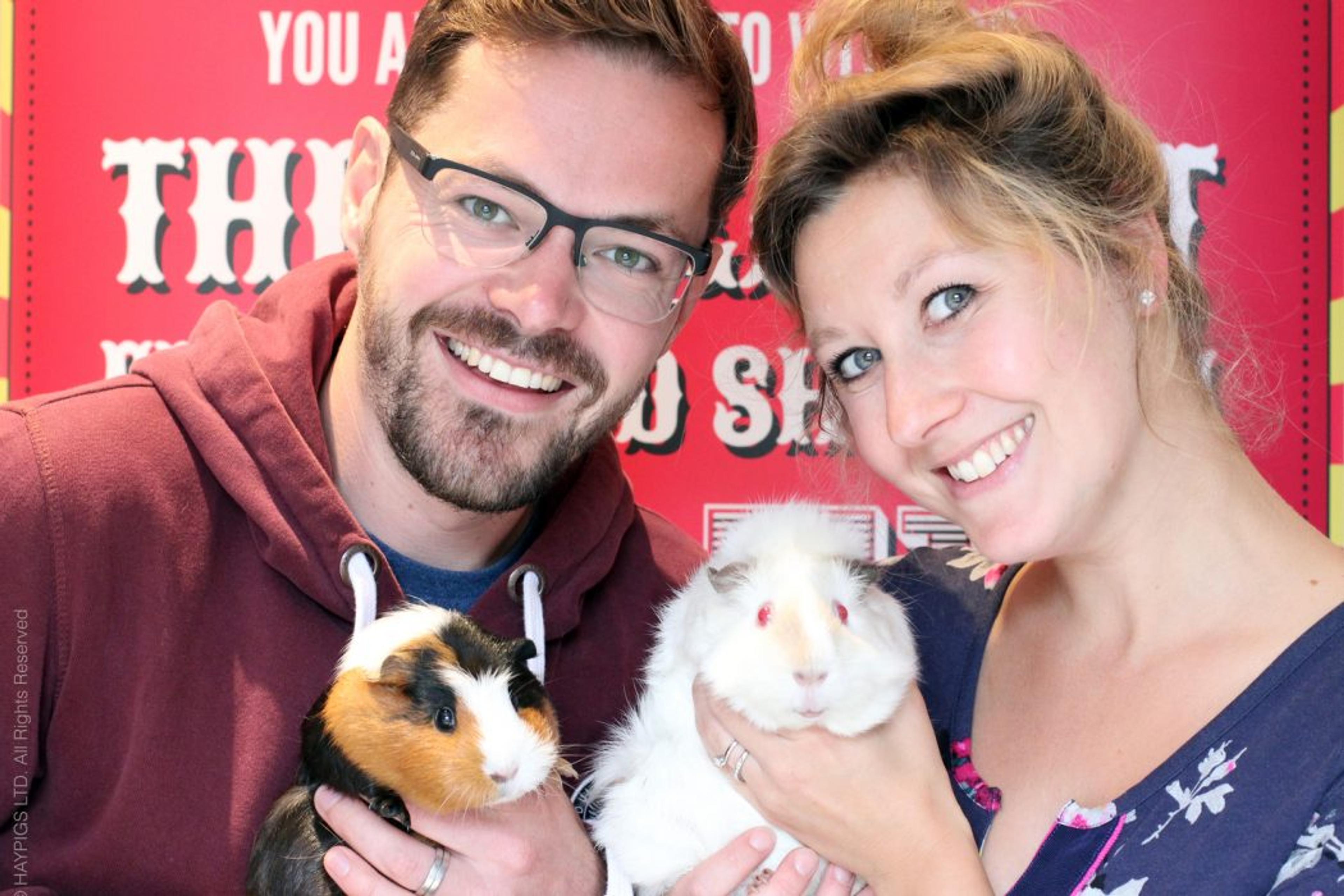 Pushing boundaries in the world of guinea pigs, Rik and Helen create fun-filled toys and accessories – including world firsts!  We find out how they went from simply adopting

Pushing boundaries in the world of guinea pigs, Rik and Helen create fun-filled toys and accessories – including world firsts!

We find out how they went from simply adopting two piggies, to creating their own range of circus-themed goodies and learn what it means for a guinea pig to ‘popcorn’ (you’ll be wanting to look that up on YouTube, trust us)…

What made you decide to first adopt guinea pigs?
Rik: It was Helen’s doing! We got married in 2010 and shortly after the wedding was over, she said, “Right, now I want us to get guinea pigs!” She’d had every other small animal as a child but never a guinea pig, so felt this was the natural next step! It didn’t take Helen long to find that we had a local guinea pig rescue near our home in Chelmsford. One visit later and we were both hooked!

Guinea pigs do make great family pets but don’t be fooled into thinking they are ‘easy’ or ‘cheap to look after’. They require the same dedication and commitment as any other pet. That said, they are fairly self-sufficient during the day, so guinea pigs are a good choice if you want the companionship of a dog or cat, but work away from home in the daytime. They have, in fact, remarkably big personalities!

So, how did having pet piggies then lead to you creating your own line of pet accessories?

Helen: Keen to lavish our new family members with love, we went out and bought them every toy and accessory on the market, they were spoilt rotten! But we quickly discovered many of these products weren’t up to the job. For some reason (probably financial), all small animal products were lumped together in one category and many of these products were trying to cater for all small furries at once, rather than being species specific. It meant that the true welfare and enrichment needs of these creatures were not really being met. With Rik’s background as a product designer and our desire to improve the lives of guinea pigs, we decided to have a go at changing things.

Disappointed with the quality of what was already on the market, how do you ensure your products stand above the rest?

Rik: We simply made it our mission statement to make the best enrichment toys on the market, regardless of cost. This was a brave step, but we knew what the market wanted and were very confident that people would want to pay more to give their small furries a better life. We go through a rigorous testing process before committing to a new design, these products are literally “tested by guinea pigs!”. If we are not totally convinced that a new product concept raises the bar and will be the market leader, we don’t do it.

All your products are themed around a circus. How did you decide of this theme for your first range of products?

Helen: We had lots of ideas for themes and will definitely do other ones in the future, but we started with the circus for good reason. Firstly, it’s unisex. Remarkably, around 90% of our customers are female, but we felt there was huge opportunity to get boys engaged and encourage them to consider guinea pigs as a pet in later life (and not just as children). By having a trendy guinea pig brand, we’re already beginning to address this. ‘PigDads’ get a lot of attention!

Secondly, with a circus theme, it’s really colourful and eye-catching, something you really don’t see in the small animal section of your local pet shop.

Thirdly, we knew that the interest in circuses (despite some bad press) was here to stay. Rik had spent 3 ½ years up in London designing film merchandise. He recognised how popular collecting ranges was and was also very aware of some of new film titles on the horizon. It’s no coincidence that ‘The Greatest Showman’ released shortly after HayPigs!® and that the remake of ‘Dumbo’ was also scheduled for 2019.

While the use of live animals in circuses is now widely condemned (and with very good reason), we felt the essence of the circus is still relevant today*. It’s all about tapping into our childhoods. That sense of fun, nostalgia and wonder. By engaging the humans and encouraging them to spend more time with their pets, everyone is a winner!

*It’s worth pointing out that HayPigs!® Guinea Pig Circus™ is a parody of the circus; our guinea pigs are playing the roles of the human characters and not the animals.

The products are all novel ideas, with fun and creative designs, but cater to real needs of small animals too. Why is this important?

Rik: Yes, while novel, it was not just about making quirky circus themed enrichment toys. We wanted each and every product to have awesome functionality and durability, and raise the bar in design and aesthetics. Funnily enough, it’s in introducing a theme that we have been inspired to come up with some world firsts! For example, our Cavy Cannonball™ – Tilting Tunnel is the first guinea pig tunnel to feature a tilting axel. Had we not been considering how to come up with a toy based on a human cannonballer, we may never have thought about it!

Will you ever create products to fit a new theme or are you going to continue to expand the circus range?

Helen: We definitely will in the future, but for now we are concentrating on expanding our existing range. We’ve just released two brand new products (the HayPigs!® Circus Treat Ball™ – 3-in-1 Enrichment Toy and the HayPigs!® Junior Food Tamer™ – Mini Food Bow) and they are already a massive hit with our customers and, of course, their piggies! We’ve got some more big ideas for 2020, but they are all top secret I’m afraid so watch this space!!

Very intriguing… Your website says that your products are “designed for and tested by Guinea Pigs”. Tell us more! What’s the testing process and how to you gather feedback from the little guys themselves?
Rik: Working with guinea pigs is very rewarding and what distinguishes them from many of the other small animals is that they do give you a lot of feedback! They have a plethora of noises and mannerisms that you can learn to read. If they’re happy or sad, frustrated or content, angry or hangry, you’ll know about it! This makes them the perfect product testers. We create working prototypes that we can gain feedback from. If they don’t like what we’ve come up with, they will discard it. If it captures their interest, they’ll be all over it – guinea pigs are naturally very inquisitive. The secret is to hold their attention for as long as possible and retain that attention every time you introduce the product. Then you know you’ve got a winning design!

Helen: The ultimate compliment from a guinea pig is a piggy ‘popcorn’. This is like an uncontrollable spasm in which your piggy leaps and spins in the air in excitement. For anyone who has a guinea pig, watching your piggy popcorn makes your heart glow inside!

A popcorning guinea pigs sounds adorable! Do you share the daily lives of your piggies online?

Rik: Yes, we have a very active social media account. We started our Instagram page before we’d launched the business and you can follow the lives of our rescue piggies on there (we currently have six). If you love cute and fluffy and a little escapism from daily life, we promise our posts will make you smile every time they pop up in your feed!