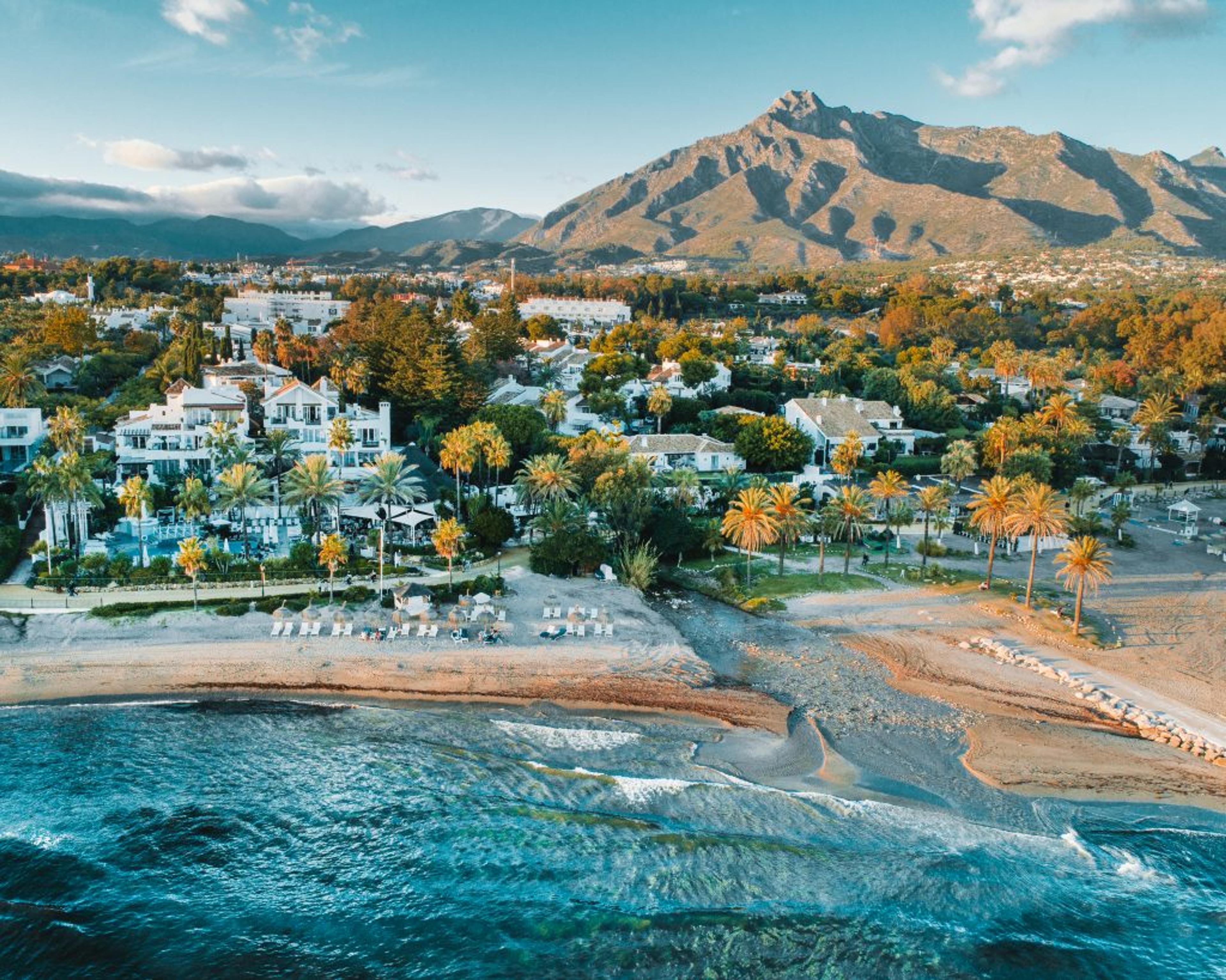 The Golden Mile is the apt name given to the stretch of heaven to be found on the south coast of Spain – between Puerto Banus in the west, and the edge of Marbella in the east. Sitting pride of place is the ‘Andalucian village’ of Puente Romano.

The O-G luxury destination, the Puente Romano Beach Resort Hotel, opened back in 1979 before ‘Marbs’ got the heyday it deserves. The area has been known for its flawless service and for changing with the times since then, welcoming Nobu in 2018 after its success in other party towns like Vegas and Ibiza.

The two hotels are centred around La Plaza, a buzzy open-air courtyard surrounded by Michelin stars, lush gardens and private villas. La Plaza is the place to see and be seen in Marbella.

Puente Romano Beach Resort has its roots firmly planted on the Marbella scene, known as a destination in its own right.

The architecture is inspired by a quaint Andalucian village, with timeless blue and white tile patterns, terracotta rooftops and green palms, swaying against whitewashed walls. The hotel is formed of clusters of suites and villas – each of them unique in size and offering, from a simple room-for-two to an all-out five-bedroom mansion. The only problem you’ll have here is the amount of choice. Our hint? The Imperial Suite has a sauna and jacuzzi on a private terrace, with views down to the Med.

If you’ve got more mates than you know what to do with, each villa (there are three in total) has a private pool and ocean views. The interiors were designed by Andrew Martin – one of the most sought-after interior designers in the world. He’s won so many awards that there’s now an award named after him.

In between these clusters are the vast gardens that make up the resort, and in between you’ll find secluded swimming pools. Paths weave in and out, linking the resort directly down to the famous Marbs beach. Tip, whenever you venture out of the ‘village’, speak to the concierge and make sure you get the insider access. It’s one of the perks of being a guest here, and you won’t regret it.

One of the things that gets us every time at Puente Romano Beach Resort is the exquisite choice of food and drink that is so readily available; 14 restaurants to be exact. You can tell when people have been to Marbella and stayed at Puente Romano Beach Resort based on the amount of influencer-friendly food shots on their Instagram grid popping up in the weeks after. Their feeds are all about throwing back to a better time when they were sitting in El Chiringuito snapping seafood and sipping sangria, or down at the beach listening to DJ sets over a round of oysters and champagne at the Sea Grill watching the sun go down.

If Puente Romano Beach Resort is the classic flagship destination in Marbella, Nobu is its naughty little sister.

Nobu arrived in 2018, some 40 years after Puente Romano Beach Resort, and has become an instant success, and one of the most exclusive locations in southern Spain.

Imagine, you’ve spent the day hanging out in the Mediterranean gardens, by one of the secluded pools, had lunch in La Plaza – washed down with an expertly crafted sangria – and caught a DJ set on the beach. You’re relaxing on your private terrace after a spa session wearing your Nobu gown taking in the last of the evening sun, and there’s a knock at the door. Who could it be? It’s obviously your pre-dinner drinks service. Nobu is calling, and this is where your night gets really interesting.

Nobu simply radiates exclusivity. But remember, exclusivity isn’t always a good thing, and it’s annoying when your go-to dining spot is packed out. There are too many privileges for us to list here about being a guest at Nobu Hotel, but one of them is ‘first in line’ access to the restaurant.

Nobu, that kind-of-a-big-deal restaurant sensation, is settling in well in Marbella, with a clientele who demand the best. Chef Nobu Matsuhisa cooks up Japanese dishes with Peruvian flavours, a cooking style that has brought him international success. His signature dish is the black cod miso. Given Marbella’s golden beachfront location, expect plenty of other seafood bites here too. Instagram your food as much as is socially acceptable.

The night continues into the Nobu Lounge with menus of sake and well-crafted cocktails, served with flair by resident mixologist Rodrigo Tartaglia. Your presence at the Nobu Lounge means more exclusive access, this time straight into La Suite, the most refined nightclub on the south coast, and the party continues until the sun comes back up.

Before you know it, you’ll be back on the balcony in your Nobu robe, waiting for the knock on the door and the night to start all over again.