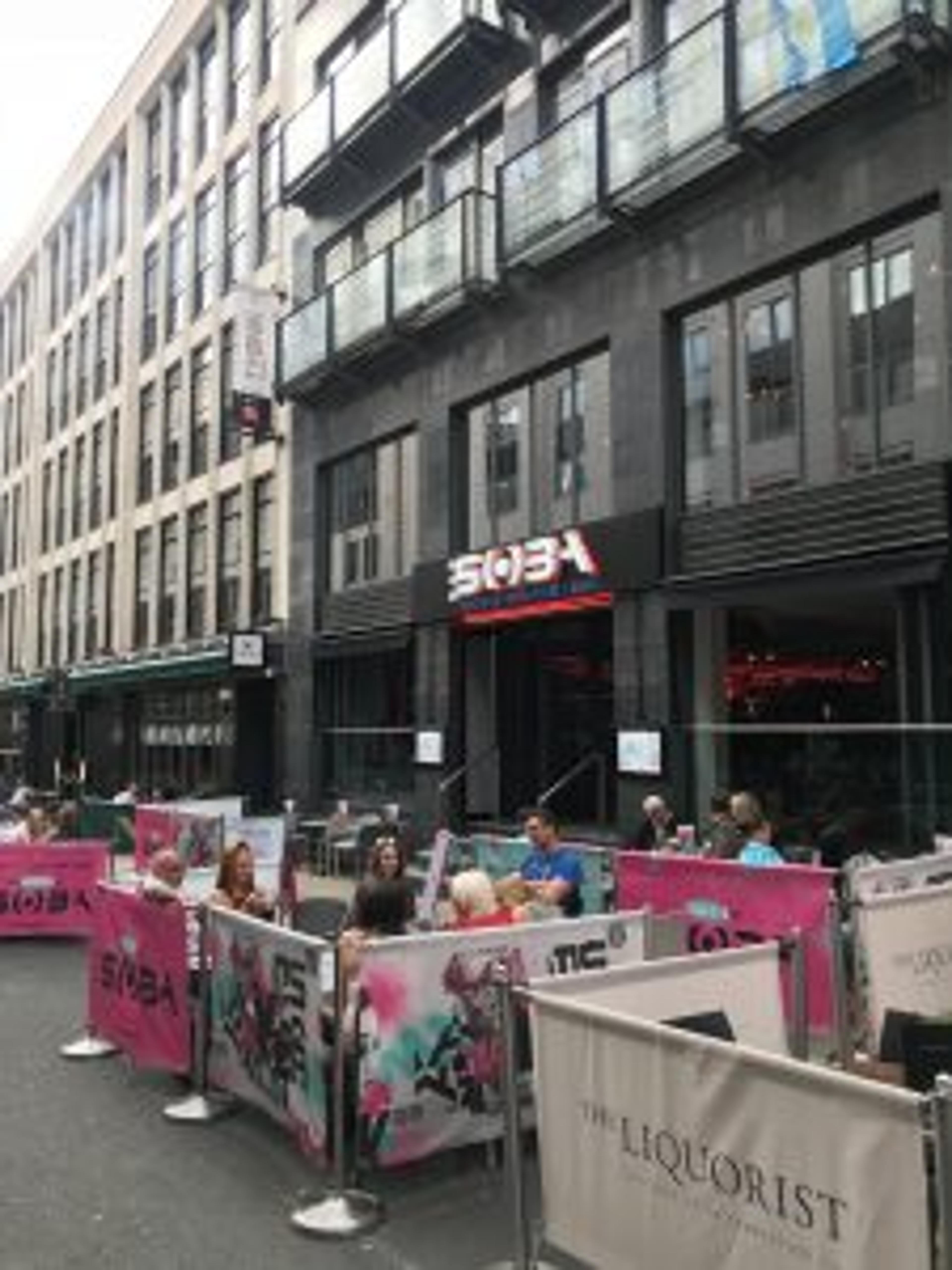 As official nomads, #TeamCoco have eaten all over the world.

As official nomads, #TeamCoco have eaten all over the world. From authentic Pad Thai in Bangkok to Curried Goat in Jamaica, we’re not shy when it comes to trying hot and spicy concoctions from around the globe. Asian fusion is our girl Jenna’s favourite delicacy as it combines brave culture mixes with exceptional flavours. You’ve got to be a pretty confident chef to mix a Big Mac with Spring Roll, but Bar Soba has done just that and so much more. Moving to their new Leeds home on the infamous Greek Street, we sent Jenna to give her verdict on their latest offering. Also to answer the question, that after a rough ride on Merrion Street, has Soba had the right amount of remix or the right amount of bollocks to survive?

“I was really sad when Bar Soba closed on Merrion Street. It became a local of mine for late night dining, beer pong and even the occasional failed Tinder date. I really fell for their eclectic interior, laid back vibes and authentic Asian fusion that almost poked fun at everything I knew about Asian food. I really never understood why the Leeds venue shut its doors, but I was very excited when I heard about their comeback.

Playing with the big boys on arguably Leeds’ most frequented street, Bar Soba looks right at home. Sandwiched between Neighbourhood and The Liquorist, it’s definitely an in keeping addition to the circuit with it’s bright exterior and moody low-lit bar that encourages rendezvous. The neon signs are to be expected after the likes of Menagerie and Neighbourhood making this a staple in millennial venues, but does it really live up to it’s predecessors? I’m unsure. The food is ridiculously good, the interiors are nice but don’t blow you away as such. The toilets aren’t great, the staff are mostly uninformed – but I need to keep remembering that this was a quick turn around. It takes time for staff to learn such an extensive menu and to keep on top of their checks and sections and I was one of the first people in the building for them to get their teeth into. I don’t want to make straight comparisons, as Bar Soba and Neighbourhood are totally different venues. But at the end of the day, if you want to be cool/Instagrammable/the go-to place – at least endeavour that your servers know more than one recommendation and get your drinks to the table in 20 minutes or less.

Saying that, when the drinks arrived and the food followed, I was as happy as a pig in muck. Delving into a selection of their starters, the Head Chef got explaining about the carnation of the menu and a little bit about the Kitchen team. Described as a 100% Yorkshire kitchen serving up Asian fusion food, I love that it’s not stereotypical. Of course you can have your token Asian chef cooking up a storm in their bandana, but why not stay true to good honest cooking without any bullshit? I really got good vibes from the Head Chef and he really highlighted the fun element of the food and you could sense his passion.

I’ve said it before, and I’ll say it again, I love Asian fusion. From high-end venues such as Sumosan Twiga in Knightsbridge to making my own inventions at home, it’s such a fun way to eat and really keeps things interesting. What’s especially exciting about Bar Soba’s menu is just how extensive it really is. From a huge selection of small plates and sides (which is wonderful for me as a serial grazer) to your home-style favourites with a #SobaRemix – they’ve really hit the nail on the head with varied options.

Simply known as ‘Street Food’ their menu packs a punch without trying to be something it’s not. They’ve got your typical staple items such as Buttermilk Fried Chicken Katsu Curry and plenty of Ramen but they’ve shook it up with their original Bangkok Burger and Tiger Prawn and Avocado Shrimp Taco. So what can I honestly tell you is banging? Most things really, but if you don’t try the Cheeseburger Spring Rolls – you’ll regret it for the rest of your days. Not only a wonder cure for a hangover, it’s a genius combination that will have you wishing there was more than four to a portion. If you want to eat tapas style, it’s more than encouraged and there’s a lot for you to choose from. Their Korean Popcorn Chicken is a spicy take on the KFC favourite with a sticky sweet and sour glaze and their Tempura Tiger Prawns are exactly what you’re thinking – delish.

If you’re still hungry after all that protein, you’re totally spoilt for choice when it comes to their big plates. I was lucky enough to find somebody who wanted to split two mains (so we could try two that we both liked) so we got involved with the Crispy Shanghai Pork and the Salt & Pepper Fish Finger Sandwich. One thing I’ll genuinely say though, is that one main is definitely enough after all those starters and you will not need Thai Fries no matter how delicious they are. Save them for when you’re drunk on their cocktails and need something salty to counteract the booze.

Talking of booze, their cocktail collection is varied and mixes twisted classics with Asian influence. One of my favourite sections was Cold as Ice, which basically keeps their frozen Gin & Daiquiri serves on rotation. One day it may be a Peach infused frozen Gin cocktail, another day it may be a classic frozen Lime Daiquiri. Perfect for those spicy ribs and ramen. If you want to go more out there however, their Drumstick Caipirovska combines Vodka with the Cuban classic and a twist of British Nostalgia. I won’t give away too much, but the first word should give it away for those who are still listening. By night, this restaurant turns into a proper nightspot with Hip-Hop & RNB blasting out and the dancefloor full of Leeds who’s-who. It may not be London, it may not even be remotely Asia – but this place should definitely be added to your culinary and cocktail bucket list. “

Open 12-late everyday of the week.